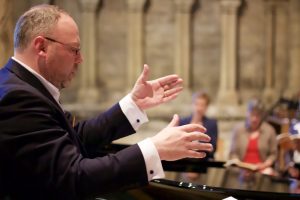 In 1733, Bach wanted to be better noticed by high political leaders in Saxony. His career was established at St Thomas’ Church in Leipzig, but in the early 1730s his employment situation was fraught with frustration. On 1 February 1733, Augustus the Strong, King of Poland and Elector of Saxony, died, and over the next few months Bach wrote a ‘Dresden’ Kyrie and Gloria to present to his successor, Augustus III. This work would later be revised in the first movements of the B Minor Mass, changing in its intended impact from a political appeal to a personal statement looking ahead to Bach’s legacy.

Over the summer of 1733, Bach worked at another direct, musical appeal to the Dresden court: a secular cantata was produced for the 11th birthday of Crown Prince Friedrich Christian of Saxony, and performed on 5 September of that year (Lasst uns Sorgen, BWV 213). Finally, on 8 December 1733, the secular cantata Tönet, ihr Pauken! BWV 214 was premiered, dedicated to Maria Josepha, the wife of the King of Poland and Elector of Saxony. Having poured his sense of dynamic rhythm and orchestral colour into these pieces, and set out intriguing and appealing solo arias, Bach must have felt a little anxious that the works should have a life beyond the occasion of their premiere. Thus it was that almost all of these two cantatas would be reworked a year later, for a special Christmas album of cantatas – six stand-alone works that would in fact be put on in the usual church format at Leipzig – Cantatas I, II, IV and VI (those we perform tonight) sung by the St Thomas’ choir on 25, 26 December, 1 and 6 January, and III and V sung at the second church at Leipzig, St Nicholas, on 27 December and 2 January.

In the reworking of this music, Bach developed more complex orchestral colours, changed keys and re-voiced some parts. More importantly, he developed the text that would bring the six cantatas together. He wove together the story of the birth of Jesus, the arrival of the shepherds, Jesus’ naming in the Temple, and the journey of the Wise Men, through a clever use of the Evangelist recitative that he had perfected earlier in his Passions, and above all by deploying Christmas chorales throughout. In spite of their secular starting point, the great trumpet choruses, for example, ‘Jauchzet, frohlocket’ (Cantata I) or arias like the motherly ‘Schlafe’ (Cantata II) seem so direct in their narration of the moods of Christmas that it is hard to recall their original context. And when you add the chorales, which set a musical tone for the key elements of the story, the sense of a developing Christmas album, as vivid as a cartoon, is irresistible. The chorale ‘Brich an, O schönes Morgenlicht’ (Cantata II) explodes with light as the shepherds are dazzled by the angels. It contrasts powerfully with the sleepy mood of ‘Schaut hin, dort liegt im finstern Stall’, where one can almost see a movie producer putting on the soft focus as the shepherds decelerate in their rush to the manger, tiptoeing towards the sleeping baby. In the final cantata, the little recitative sung by Herod is dreadfully slippery, far more obviously characterised than the intense recitatives sung by Peter, Pilate and other characters in the Passions; and when the Kings finally arrive, standing before the cradle, the humility of the chorale ‘Ich steh an deine Krippen hier’ is deeply felt.

The remarkable achievement of Bach in the Christmas Oratorio is how he could take elements from two different colourful compositions and weave them into a vivid, almost popular retelling of the Christmas story, maintaining the strong characterisation through the new music he added to the existing pieces. Chief among the new elements is the Sinfonia which introduces Cantata II, with a symphonic scoring that uses a quartet of oboes and oboes da caccia (the wonderful bell-shaped horn of these instruments creates a warm, rustic tonality), against strings and flutes: one of the grandest and richest of pastoral evocations in the eighteenth century. But my own favourite moment from the newly composed music is in the fourth cantata, when the bass reflects tenderly on the meaning of the name of Jesus, only for the intensity of his contemplation to be re-doubled through the deeply touching introduction of a single chorale line (sung today by a small group of sopranos from Samling Academy).

The cantata form which Bach perfected in the 1720s gives us something a little extra in our performance tonight. To mark the solemnity of the Epiphany, in the second half of our concert, just before we begin Cantata VI, we will sing the opening chorus of BWV 123, Liebster Immanuel. This cantata was first performed on the Feast of the Epiphany in 1725, exactly a decade before the premiere of the sixth part of the Christmas Oratorio. The orchestra seems to evoke the graciousness of the action of genuflection. First the violins fall softly down through an octave, in a gentle dance in 9/8 time; then the pairs of woodwind call against each other in falling trills. Briefly, we leave to one side the highly coloured story-telling world of the Christmas album; this is a moment of intense religious devotion, asking for the coming of the Saviour. And to balance this addition, in the first half of the programme, just before we perform Cantata II, we offer two verses of the exquisite and well-known Christmas song ‘O Jesulein süß’. The song makes a simple, choral statement of the relevance of Jesus’ presence in human life, as the scene is prepared for the shepherds on the hillside and the magnificent revelation they will shortly receive.

How remarkable that by driving his theological devotion back across the colourful, secular statements he made in BWV 213 and 214, Bach managed to give us a Christmas Album that we can enjoy as straightforwardly and with the same sense of instant beauty that we get from one of those beautifully illustrated Christmas books we read as a child. With Liebster Immanuel we add a note of faithful longing, seasoning our performance so that as we gasp at the colourful music, we remember too to look at the theological passion of the chorales and the meaning of the Incarnation.