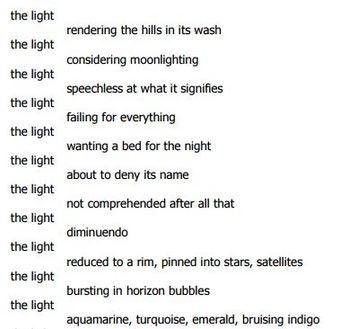 Janet studied composition at the Royal Academy of Music, in what sounds like a truly formidable class: her fellow students included Michael Berkeley and Brian Ferneyhaugh. She won several composition prizes at the Academy, and was later selected for the BBC Young Composers Forum.

A few years ago, while she was working as a music therapist, she met the poet Gordon Hodgeon. His severe spinal problems made it impossible for him to write or to undertake any practical music therapy, so instead Janet worked with him helping him past the physical hurdles that were preventing him from getting his poems from mind to page. After Janet retired, she returned to composing and suggested to Gordon that she set his poetry. His choice for her to set was The Light, and he explained that he could imagine the words ‘the light’ as a drone, forming the spine of the music, which, as you can see from the image here, they also do in the poem.
​
The other phrases hang off this backbone, as the fragments of music and text reflect on the range of meanings of light as colour, harmony and life itself, delving into the mind of the poet with music that is both thoughtful and innovative, and stunningly beautiful. There’s also a strong feeling of what it’s like to live without light; the night-time terrors and the darkness that the mind can inflict on us lurk in the music, so that when the altos sing ‘from all ill dreams, defend our …’, quoting from the compline hymn Before the Ending of the Day, it feels like a very real need. By the end of the piece though, this prayer is answered, and the darkness is past as we are released into perpetual morning.
​
It’s been a great privilege for us to work on Janet’s piece, and to have had her feedback and support while we were learning it, and we’re greatly looking forward to singing it again for her, and for you, next week at Ushaw.