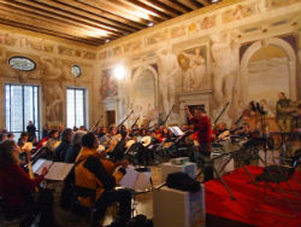 Our next concert is probably the most unusual one we’ve ever taken part in, for never before have any of us sung with an orchestra of 40 lute players.

We’ve been invited to take part in a concert in Durham Castle on 30 October with the European Lute Orchestra, a group of professional and semi-professional lutenists that was founded in 2011 by their director, Professor Gian Luca Lastraioli, with the aim of recreating a lost sound of the renaissance – the massed lute band. This is also the first time that the European Lute Orchestra has performed outside Italy.

The group plays lutes of all sizes, from little mandolins up to the long-necked bass instruments such as the theory –  an instrument that you’ll recognise if you came to our St Matthew Passion or Theatre of Royalty concerts, and which you’ll see again at Messiah, played by Hector Sequera, member of the Durham University Music Department and the guiding force behind this concert.

​We’re preparing two Italian pieces to sing with the lutes, both by Emilio di Cavalieri, who lived in the second half of the sixteenth century and who was active in the musical circles of Florence (under the patronage of the Medicis) and Rome. O che nuovo miracolo comes from music written for the marriage celebrations of Grand Duke Ferdinando di Medici to Christina of Lorraine. It’s a typical high renaissance text – rather opaque and full of extravagant illusions to figures from classical mythology – but with its joyful rhythmic shifts between triple and duple time it’s going to be great fun to perform. Cavalieri was part of the group of Italian musicians making experiments with dramatic music that eventually evolved into opera, and although his Rappresentatione di Anima, et di Corpo is strictly described as an oratorio because of its spiritual subject matter, Hector told us that, as it is also dramatic and written to be staged, one can make a case for it being the first opera. We’ll be singing the closing Festo, a dialogue between the body and soul.

These Cavalieri pieces are giving us all sorts of interesting challenges, and certainly take us right away from the comfort zone we’re in with Messiah. Apart from those amongst our number who’ve sung opera, most of us aren’t used to singing in Italian for one thing – it’s not a common language in the traditional choral repertoire, but getting those lovely bright vowels right will undoubtedly benefit us for everything else we sing. And, as well as the tricky rhythms, we won’t really know how it all fits together with the lutes until we meet Prof. Lastraioli and his team on the day of the concert.

To complement the Italian pieces, we’re coming right back to our home soil, with music by Cavalieri’s English contemporary William Byrd. Infelix ego sets a text written by the radical Florentine preacher Savonarola the night before his execution, and it’s a powerful meditation on penitence that builds to a truly symphonic climax. We sang it in the Chapter House a couple of years ago, and we’re relishing the chance at giving it another outing. The other Byrd piece, Laudibus in sanctis, mirrors the rhythmic excitement and swing of the Italian pieces.

European Lute Orchestra and Durham Singers: Sunday 30 October, 8 p.m., the Great Hall, Durham Castle
Tickets are £12 and can be booked in advance on the University Music Society’s website via the button below, or be bought from the Durham World Heritage Centre on Owengate, or on the door.