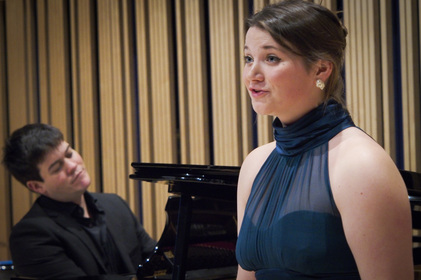 Mezzo-soprano Marnell Blair joins us for the demanding and dramatic solo part in Copland’s ‘In the Beginning’ at  our summer concert on 2 July and we’ve been very excited by what we’ve already heard in rehearsals. She kindly agreed to talk to us about her singing career so far and her plans for the future.

Talking to mezzo-soprano Marnie Blair, it quickly became apparent that above all, she loves to sing and would quite happily sing all day, every day, if she could. Indeed, last year, her final year studying music at Durham University it seemed as if that was exactly what she was doing: in the space of a fortnight at the end of the Epiphany term, she gave a ravishing performance of Britten’s song cycle A Charm of Lullabies whilst still recovering from the bruises she got from tumbling around the stage of the Gala as Cherubino in Mozart’s Marriage of Figaro; and then sang the alto solos in Bach’s B-Minor Mass with the University Chamber Choir.

Marnie said she remembers singing all the time as a child too, singing along to Disney movies when she was little, then at secondary school, when a teacher pointed her out as ‘a girl who can hold a tune’ she began to sing more seriously, in choirs and having singing lessons. She was also studying flute, and it was when she arrived in Durham to study music that everything fell into place. ‘I spent my first year singing everywhere that I could, building up experience and confidence, and I started having lessons with Miranda Wright, which was just by luck – I picked her because she was the only teacher on the list who had a website, and she’s been brilliant, she’s so caring and supportive as well as being such a good teacher’. Before long, she was singing in the university’s leading choirs and opera groups, and picking up solos – including a beautiful performance of Britten’s Corpus Christi Carol at our Britten centenary concert in 2013.

​This year she’s having a year off studies, working in the office of the National Youth Choir of Great Britain and taking the time to focus on how to develop her musical career. She spoke excitedly about starting lessons with soprano Susan McCulloch, Professor of Voice at Guildhall School of Music and Drama and a highly sought-after vocal coach and masterclass leader. In the meantime she has been benefitting from the coaching and opportunities offered by two prestigious development schemes for young singers: Genesis Sixteen and Samling Academy.

Genesis Sixteen is a programme for young ensemble singers, run by Harry Christophers and Eamonn Dougan of The Sixteen, and she spoke warmly about the passion and knowledge the two have for every corner of the choral repertoire. She also explained how the highly selective programme is an excellent starting point for making friends and contacts in the world of professional singing; “as well as the opportunities it opens up for freelance work, singing with so many talented people makes you feel that you’re there for a reason”.

Meanwhile, at the Samling Academy courses here in the North East, she’s been able to explore and develop her solo singing skills. “The Samling weekends, with tutors such as pianists James Baillieu and Caroline Dowdle, really focus on interpretation and performance, and it’s incredible to get that level of input and tuition in a really comfortable, friendly setting. At the stage when repertoire is performance-ready, the technical stuff should be automatic, and what’s important at Samling is that you get the chance to really give your attention to putting across the music, because that’s what it’s all about. It’s the same at Genesis Sixteen: performance is fundamental, you have to have something to say and be fascinating to watch”.

With such a varied background, taking in ensemble singing, opera and solo work, I was interested to know where Marnie’s personal musical passions lie, and the answer came pretty quickly: “I’m a big fan of Britten, and I love English song. Gurney, Finzi, they’re so lyrical, and although I love all the wonderful German Lieder repertoire too, where you can really sing through the beautiful phrases, I really enjoy singing in English, and it’s easier to connect emotionally with your own language and culture” – and she mentioned Ivor Gurney’s ‘Sleep’ as one of her favourite songs. On the stage, playing Cherubino last year gave her a taste for comedy, and for trouser roles, “I enjoyed the slapstick and humour, and the fact that with a comic role, you get an instant reaction from the audience, which doesn’t happen when everyone’s quietly listening to a tragic aria”. And long term, she says her dream role would be Octavian in Strauss’s Der Rosenkavalier. In the short term though, her next appearance after singing Copland with us will be in Samling Academy’s Shakespeare themed summer production, in which she’ll be singing more Britten – the duet ‘Puppet? Why So?’ from A Midsummer Night’s Dream.