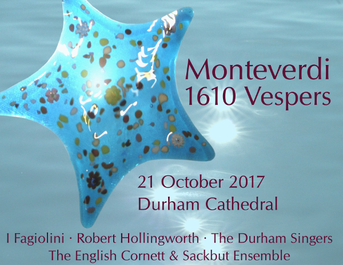 This week, our Monteverdi 1610 Vespers plans started to take shape, as we had a first peek at the music and a workshop with Robert Hollingworth, the director of I Fagiolini, who will conduct our performance on 21 October. It was a hardworking but rewarding day, and Robert managed to cram in a fantastic amount of information for us, along with a good helping of classic comedy references and plenty of fun.
Robert began with a quick overview putting the 1610 Vespers into context. We’ve become accustomed to think of these Vespers being performed in the huge space of St Mark’s Basilica in Venice, perhaps with choirs and instrumentalists placed at a distance from each other, and that’s often how the piece is performed today. But Robert reminded us that Monteverdi wasn’t at Venice when he wrote the Vespers – they formed part of his portfolio for his job application there – and he pointed out that a lot of the fast dialogue that he writes between the two choirs is really no fun at all if you try to spread the forces too far apart. So with that in mind, we’ll be singing in front of the tower in Durham Cathedral, to create a more intimate performance space.

In another big change from what many of us may be used to, we looked at the relationship between speeds in the Vesper psalms as the music shifts back and forth between double and triple times. Things were changing so rapidly in the early 17th century that sometimes we can’t tell exactly what composers meant when they used particular time signatures, but Robert’s research on this topic has led him to the conclusion that, in the case of the 1610 Vespers, Monteverdi was sticking firmly and clearly to Renaissance conventions with his time signatures. The result is that the triple-time passages become slower and also much more graceful than what we may be used to hearing or singing.

All conductors talk to choir about words and diction of course, but Robert took this a step further than most, with some useful and fun tips on really making our Latin sound properly Italian (if you hear any of us wandering around town muttering “toast-butter-and-marmalade” in an Italian accent, don’t worry). He makes the point that the music is always a vehicle for the words – the text came first of course. When we’re singing in Latin, we can fall into the trap of thinking that it’s enough just to know the gist of each phrase, whereas Robert encouraged us to write in the meaning of every single word. We did some work on this with the Victoria Responsories that we’re singing in April, and we found that this highly dramatic music really comes alive when you can see the colour that Victoria adds on almost every word. Always, the emotion has to come first, and we have to find ways to embrace that, not shy away from it.

Those of us who were there in 2014 when Robert last visited us remembered the work he did then on tuning, and he reminded us again that our modern tuning system is essentially a compromise that flies in the face of physics to allow music that uses all possible keys and notes. Until the eighteenth century, mean tuning was used, which, because it’s based purely on the mathematics of natural resonances, makes everything sounds just a little sweeter, particularly the thirds. Imagine a line of ballet dancers where all of the dancers are just very slightly out of step: that’s what the air molecules are doing in our modern tuning system. Now think of the beauty that comes when those dancers are all perfectly aligned: that’s what happens with mean tuning, and it’s what we’ll be aiming for.

We really felt the effects of Robert’s work when we gave our Byrd concert in summer 2014, so it was very useful to have a refresher just before we sing another big programme of Renaissance polyphony. But above all, it was incredibly exciting to have a taste of what it’s like to work with someone who is not just one of our great experts on Monteverdi’s music but who also has such an infectious love and enthusiasm for it too. Now we just have to go away and, with the help of Julian and Francesca, learn the notes, the style, the tuning, the timing and the text. What we have to do is nothing like learning Bach or Handel: it’s a whole new musical journey, with a rather exciting destination to look forward to.

If you want to hear Robert talking more about Monteverdi and about the thirty years of his group I Fagiolini, he was on BBC Radio Three’s Early Music Show on 5 March – listen here for 30 days:
http://www.bbc.co.uk/programmes/b08hd24g

The Other Vespers
I Fagiolini and Monteverdi are celebrating 30 years and 450 year anniversaries this year, and have marked this with a new recording of his later Vespers setting, that of 1640, this time written for Venice. In this introductory video, Robert talks about the 1640 Vespers, with a few tantalising clips of the music too.