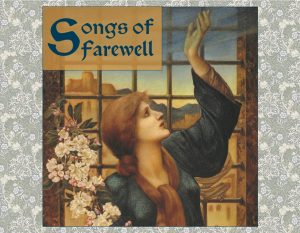 Sir Charles Hubert Hastings Parry, who died a hundred years ago this year, made a great impact on the public musical life of our nation. He wrote the tune for ‘Jerusalem’, which as well as becoming an unofficial national anthem for England was also adopted by the suffragette movement and later by the Women’s Institute; whilst his majestic anthem ‘I was Glad’ is sung at coronations, royal weddings and other grand occasions.

​We’ll be exploring a very different side of Parry’s music in our concert on 24 March when we sing his Songs of Farewell, six pieces for unaccompanied choir in which Parry reflects on loss, heaven and the approaching end of his own life.

The Songs of Farewell were written at intervals over the last decade of Parry’s life, but although he heard them all individually, they only received their first performance as a complete set at a memorial service for Parry in February 1919. Parry sets texts by five English poets: Henry Vaughan, Thomas Campion, John Gibson Lockhart and John Donne, before concluding with a setting of verses from Psalm 39, ‘Lord let me know mine end’. The first four movements are personal reflections on death and heaven, but in they seem to accept, or even welcome death. The first of the set, ‘My soul, there is a country’, with words by Henry Vaughan is a peaceful vision of heaven, through the salvation granted by Christ. Parry contrasts the eternal peace of heaven with the transience of earthly life when he sets the words “one who never changes”, in a constantly changing set of rising sequences. In Thomas Campion’s ‘Never weather-beaten sail’, the soul yearns to escape from the troubles of human life and fly to heaven, and Parry expresses this in arching phrases that rise up out of the musical texture.

Parry spent some time studying in Germany, and the deep influence of nineteenth century German choral music, particularly that of Mendelssohn and Brahms, comes through clearly in the Songs of Farewell through Parry’s masterly use of counterpoint and in his expressive harmonic language. The outbreak of the First World War was a double-blow to Parry; not only did it destroy the lives of so many young men, including several promising composers, but it also severed the close cultural ties between Britain and Germany that lie at the heart of Parry’s music, and all this loss is poured into the last two movements of The Songs of Farewell. Donne’s sonnet ‘At the round earth’s imagined corners’ invites us to remember all those who have died violent deaths, which Parry evokes with angular syncopation for tenors and basses before a lovely melody sings out in the alto line: “but let them sleep, Lord, and me mourn a space”. The piece concludes with a heartfelt prayer that we may learn how to repent.

The final piece, the Psalm text, ‘Lord let me know mine end’, is the longest and most complex of the set. It begins simply; the first few pages are reminiscent of earlier English music such as the piece by Purcell which we’ll have sung earlier in the concert, but the music becomes increasingly turbulent as the psalmist recounts how God punishes human wickedness by making the body age and decay, with complex double-choir writing, and key changes that are both rapid and extreme. After these outbursts, the Songs of Farewell end quietly, and sadly; the words search for reconciliation with God, and the music dies away in a desperate plea for just a little more time that surely came straight from Parry’s heart during his prolonged illness: “O spare me a little, that I may recover my strength before I go hence and be no more seen”.