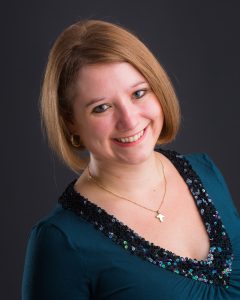 Our Assistant Musical Director, Francesca Massey plays a vital role in the life of the Durham Singers. Many of you will have heard her sensitive accompaniments on piano or organ in our concerts, but she also does a great deal behind the scenes: as well as accompanying our rehearsals, where she may have to deal with reading complex contemporary music without a piano reduction, or transposing at sight to baroque pitch, all whilst making tactful decisions about how much keyboard support we need, she also takes some rehearsals, and gives insightful and constructive performance advice leading up to concerts. ​This term, however, she’s taking a bigger role, directing us in Parry’s Songs of Farewell, so continuing our blog posts that look beyond the programme biographies, we talked to Francesca about her musical career and the music she’s chosen for our concert.

Francesca will also be known to many in her role as Sub-Organist at Durham Cathedral. Like many organists, she came to the instrument after previously playing piano and singing in her local church choir, beginning lessons at the age of 12: “the great variety and range of orchestral sounds was what drew me to the instrument, initially, although I didn’t enjoy practising in cold, dark churches!”. She says that once she’d realised she would never become an Olympic gymnast, she always wanted to become a professional musician. She was able to enjoy some of the many wonderful opportunities open to young organists through gap-year and student scholarships; she held positions St George’s Chapel, Windsor Castle, and Gonville and Caius College, Cambridge. Postgraduate study at RNCM and a job at Peterbrough Cathedral followed, then in 2011, she became the first woman to take up an organist position at Durham Cathedral.

Speaking about her job here in Durham, Francesca said that “Durham Cathedral’s organ is one of the best in the country, and so having the opportunity to play it daily is a real privilege.  The job is extremely varied, and incorporates many aspects of music-making which I particularly relish: accompaniment and solo playing, conducting and choir training  Being involved in the musical upbringing of choristers is a cherished responsibility, and knowing that your musical contribution has brought joy, or else moved someone in some way, makes it all the more worthwhile.”

Her musical tastes are wide-ranging, but she particularly enjoys the music of the late Romantics and early 20th century, and in terms of the organ, she feels particularly at home in the French symphonic repertoire, as well as enjoying Howells and Leighton. She also enjoys exploring contemporary music, and the sense of a blank canvas that new music can give to an interpreter. What she looks for is music that offers expression and meaning beyond the notes, something which is definitely reflected in the pieces she has chosen for our Passiontide programme: Parry’s Songs of Farewell and Scarlatti’s Stabat Mater, both of which she enjoyed singing whilst she was at Cambridge.

When I asked why she chose this demanding cycle, she explained that, while the beautiful music in Parry’s Songs of Farewell is innately singable, it also challenges a choir to produce well-tuned and sustained singing, and she will be looking for us to explore the music’s emotional depths. We have sung three movements of the cycle in the past, and we are looking forward enormously to working on the full set with Francesca. Domenico Scarlatti’s ten-part Stabat Mater is much less well-known, and Francesca thinks it deserves to be heard more often, with what she describes as its incredibly rich and luscious setting of the very moving text.