Summer concert: The Cloths of Heaven
Songs of love and of home, from Ireland and America 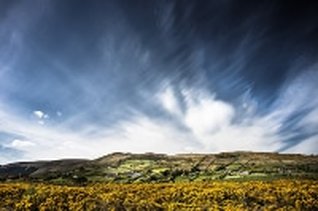 Benjamin Britten’s choral masterpiece, Hymn to St Cecilia, was written on a boat travelling back to England from America where he and Peter Pears had spent some of the first part of the Second World War. It is an achingly personal piece of music, setting a long poem by Britten’s friend W. H. Auden, and can be read as a biographical reflection on Britten, the brilliant composer, whose comet-like appearance on the musical scene in the 1940s was counterbalanced by his personal vulnerability and anxiety. Indeed, during his time in America, the project of a joint celebration of music and Britten’s own talent had been discussed with Auden several times. But how telling that it was only while travelling home, returning after a difficult period when Britten had suffered a serious illness, that he felt able to set the words. There is a lilting quality in the refrain that seems to capture the ebb and flow of the Atlantic waves. At the heart of the piece, a passacaglia, a form that Britten used for some of the most meaningful music in his later works, expresses the complex search for artistic and personal fulfilment: ‘O ear whose creatures cannot wish to fall’. Out of this, a stunning soprano solo floats the very aching lines ‘O dear white children’. This really is one of the great pieces of English choral music.

With that sense of longing for home, but also in its physical act of composition, travelling between America and Europe, Britten’s Hymn to St Cecilia touches on the themes that draw all our music together in this programme. We are singing five pieces by the Irish composer Charles Villiers Stanford – his well-loved Three Motets and two gentle partsongs; but we also look to America in the fresh sound-world of Samuel Barber and Augusta Read Thomas. Barber’s settings of Irish poetry have a very light, airy texture and draw out the lilting quality of the Irish poems he sets: two love songs and a darker piece, Anthony O’Daly, commemorating an outlaw of western Ireland in almost comminatory language. We bring the concert to a close with more Irish and American traditional music, and also with a beautiful gentle setting of Yeats by the contemporary British composer Howard Skempton, in which a tapestry of sound builds up a picture of clouds and sky interlaced with colour.
Augusta Read Thomas is one of the most eminent American composers of her generation; she writes music of great clarity, compositional focus and depth, but also music that appeals through the mixing of sounds and harmonies. Her music is a very modern foil – fresh and winsome – for the Barber partsongs in the second half of our programme. There is an American feeling of openness in her chord spacing, which looks back to Barber and Copland, but the use of colour and overtones in her harmonies also reveals her interest in the contemporary British composer Oliver Knussen (himself an admirer of Britten), with whom she studied in the 1980s. While much of her music is written for orchestra or ensemble – she held a residency with both Boulez and Barenboim at the Chicago Symphony Orchestra from 1997 to 2006 – she has set poetry for voices on numerous occasions.

The two stunning settings of e.e.cummings in tonight’s programme were written for one of the many very talented American girls’ choirs, the San Francisco Girls’ Chorus, in 2008. The first, sky candy spouting violets, picks up the theme of colour and fireworks in this gorgeous poem, which Cummings printed patchily, so the words are set out on the page rather like a cloud of flowers or fireworks. Words that describe colour explode out of the texture in little bursts of brightness, and Thomas works out the harmonic patterns and combinations with real compositional flair. ‘(kiss me)’ is a very winsome love poem, and Thomas’s music, now quieter and more seductive, catches its mood brilliantly. The words ‘(kiss me)’ appear in parenthesis, as though whispered, and they are set as fluttering interjections in the music, which ends in a cool, openly spaced chord, softly evoking the acceptance of the delight of the kiss.