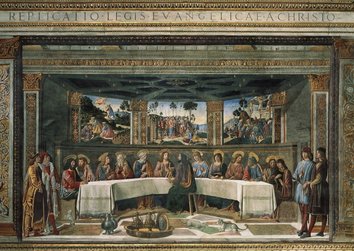 In his programme note for our concert on 8 April 2017, Michael Gilmore takes us back to 16th century Rome, using Rosselli’s Last Supper fresco in the Sistine Chapel as a visual guide to the music. (Click on the picture to explore a larger version of the painting on Wikipedia Commons – new window)

If we were to link our concert programme to a place, it would be Renaissance Rome where much of the music was written, and to its Sistine Chapel where some of the music was first sung and has been heard repeatedly over the centuries since it was written. The Sistine Chapel is magnificent. Visitors are overawed by Michelangelo’s touch of creation on the ceiling and his brooding last judgement above the altar, but they often overlook the less famous frescoes on the side walls. Five artists took events from the lives of Moses and Jesus to mark moments in the annual cycle of Christian worship. One of the paintings by Cosimo Rosselli marks a climax of the sequence in Holy Week. His painting of the last supper is in a way the archetype of our concert programme.

Holy Week is a divine drama but told in the language of a human story of grief. It is about remembered signs of affection, and significant material things that speak with a directness about the loved one. It is a remembrance of the last days of Jesus, whose words and gestures take on new meanings in this time beyond his death.

Rosselli’s last supper is set in an octagonal room in which Jesus sits behind a table flanked by eleven of his disciples. Judas sits opposite him with his back to the viewer, bearing a sack for the thirty pieces of silver. The table is bare except for a chalice of wine which Jesus is blessing. On the floor are pitchers and bowls from the washing of feet. On the back wall are three pictures, pictures within the picture, depicting images of the Agony in the Garden, the Betrayal by Judas and the Crucifixion. Symbolically, the last supper forms the lens through which the events of Holy Week are viewed; it places them in the liturgy of Holy Thursday, with its Tenebrae vigil service and the Mass of the Lord’s Supper, which commemorates Jesus’s institution of the Eucharist. This is the locus of our programme of music.

By the time the Sistine frescoes were complete, Rome had become the artistic capital of Italy, drawing artists and musicians from around Europe. Palestrina, a local from just south of Rome, was drawn to this cosmopolitan culture. Post-reformation Catholicism was regaining its confidence after the reforms of the Council of Trent. Among the Council’s decrees was a 1562 direction on Church music, which called for clarity in the use of text, ‘the words should be apprehended by everyone and the hearts of the listeners should be ravished by longing for heavenly harmony….’ That was a tall order.
​
Palestrina rose to the occasion. He wrote extensively for papal functions and much of his music was destined for performance by the papal choir in the Sistine Chapel. Laudate Pueri Dominum, from his 1572 collection of motets, is the one piece in our concert that has a festive tone. Much of its energy comes from the antiphonal exchange of the split choir and the clarity of the textual interpretation. A Sunday vespers psalm setting, it begins our Holy Week narrative on Palm Sunday with the triumphant entry of Jesus into Jerusalem.

Then the mood changes with the Eucharistic motet, O Sacrum Convivium, placing us firmly in Rosselli’s scene of the last supper. Aquinas’s text is given a contemplative feel by Palestrina. ‘O sacred feast in which Christ is taken’ describes the receiving of the sacrament and recalls that, like the pictures within the picture, without Jesus’s death there is no sacrament and no redemption.

Thomas Tallis wrote his version of O Sacrum Convivium at about the same time as Palestrina, but Tallis was writing many hundreds of miles from Rome, as a Catholic in a contested protestant England. Protected by royal patronage that recognised his exceptional talent, Tallis was able to hold on to a now feeble thread linking England to papal Rome and write to Catholic texts, but perhaps with a greater sadness in the music.

‘What love is this of thine?’ In 1682 the puritan answer of Edward Taylor joined the Catholic voices in one of his ‘Preparatory Meditations’ on the Lord’s Supper. Unusually for a puritan, it is not merely commemorative in its Eucharistic Theology. The poem was set to music by Kenneth Leighton in 1985. ‘What love is this of thine that could bring thy Godhead to marry our manhood?’ The answer is a ‘matchless love’, filling Heaven and the world, and even overflowing hell, with a mighty tide of blood bleeding from Christ’s veins into those of the elect. Leighton’s setting has an intensity of both joy and terror at the reality of what is implied in the unfolding story of divine love. 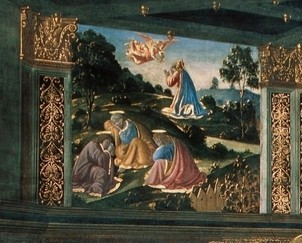 Loneliness too is part of the ​drama of Holy Week, epitomised in the final fragment of a psalmist’s verse from the cross, ‘why have you forsaken me?’ Lauded on his entry to Jerusalem, Jesus becomes a stranger. Words of malicious intent are spoken against him, a network of murmurings, to which he does not belong. The celebration of the last supper and its moment of intimate communion are left behind when, in the Garden of Gethsemane, even his apostles fail him. In Rosselli’s inner pictures, Jesus is with the three he hopes to rely on for comfort but they fall asleep. The terrible accusations of the Tenebrae Responsories capture this moment: ‘Una hora?’ ‘Could you not wait one hour with me? You who swore to die for me. Do you not see Judas, how he does not sleep, but hastens to betray me to the Jews?’ In concert performances, the anguish is divorced from the liturgical drama in which the Tenebrae Responsories were conceived. We might imagine its Sistine setting.

It was a vigil service of words and music in the late evening; the name Tenebrae (darkness) evokes the gospel verse at the crucifixion, when ‘there was darkness over all the land’. The service was held on the night before each of the last three days of Holy Week. Six candles of unbleached wax adorned the bare altar, and fifteen more were set on a large triangular stand near the choir. The choir punctuated the sombre plainchant of the psalms with the polyphony of the responsories. After each psalm a candle was extinguished, until at the end of the liturgy just one candle remained. The remaining light was then hidden behind the altar, for the Miserere to be sung in darkness: ‘Have mercy on me!’
Victoria wrote his Tenebrae Responsories in post-Council Rome. Their power lies in letting the text speak. The music avoids unnecessary complexity and lets the words paint their picture: the betraying kiss of ‘Amicus meus osculi’, the innocence of the lamb in ‘Eram quasi agnus’, the swords and clubs of the ‘Seniores populi’, and the accusation of ‘Una hora’.

It was long after Palestrina and Victoria that Gregorio Allegri created his finale for the Sistine Chapel Tenebrae. Originally, Allegri’s five-voice main choir sang a simple version of the Miserere chant, and a second choir of four soloists improvised abbellimenti (ornamentations) on the cantus firmus. Eventually the abbellimenti were fixed, including the daunting high C of the soprano solo. From the year of its composition in 1638, the Miserere was performed annually in the Sistine Chapel on the eve of Maundy Thursday and Holy Saturday, most famously in the hearing of Mozart.

Sadly, the Tenebrae service was lost in the otherwise welcome liturgical reforms of the last century, which displaced the mournfulness to Good Friday and focused Maundy Thursday on the mandate of loving service. Meanwhile, there in the seventeenth-century darkness of the Sistine Chapel, as the sound of the Miserere faded, the papal entourage, not yet daring to anticipate the Easter light, knelt in penitence, until the ceremonial knock of a closed liturgical book on the wooden stalls signalled: ‘It is finished.’