In the first of a series of posts introducing some of the music for our summer concert, we begin in the beginning… 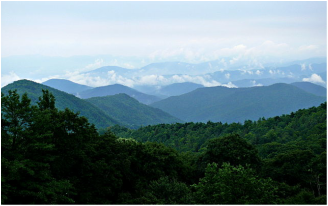 Despite a dry title, the Harvard Symposium on Music Criticism held in May 1947 sounds as if it was quite an event. Musicians and writers from across America and Europe gathered together for three days of lively discussion, with E. M. Forster giving the opening speech; and every night there was a concert with music specially commissioned for the occasion. These new works included a cantata for chorus and brass by Hindemith; new chamber works by Schoenberg and Martinů; and In the Beginning a setting of the Genesis Creation story for unaccompanied choir and solo mezzo-soprano by Aaron Copland.
Copland was one of a generation of composers seeking to create an authentically American sound, to write music that couldn’t possibly have originated anywhere else, and the results in his orchestral music are well known: Fanfare for the Common Man, Appalachian Spring and Rodeo fuse the sounds of American folk music, hymns and jazz in a spacious, open-hearted sound. Copland didn’t write much choral music, and his first efforts, a set of four motets written in 1921 while he was an ‘American in Paris’, studying with Nadia Boulanger, he dismissed as being too much influenced by European composers.

By the time he wrote In the Beginning though, Copland had found his American voice; the music is coloured with bright, open intervals, infectiously jazzy rhythms and lots of harmonic colour. Each of the four chorus parts covers pretty much a full two octaves, with in most of the notes in between as well, almost as if Copland is using the full musical scale to depict the diversity of creation.

For us as a choir, singing this piece brings a sense of completion to our season, pairing Copland’s piece with Haydn’s setting of the same texts which we sang back in November, and it’s fascinating to compare the two composers’ approaches, separated as they are by 150 years and an ocean. Although Haydn’s oratorio is mostly cheerful, his Creation mixes the Biblical text with Milton, and hints at the darker outcomes of the story, of sin and damnation, whereas Copland sticks to the Genesis text, and by ending when ‘man became a living soul’ he retains a breezy New World optimism. Writing for unaccompanied choir, Copland has only the human voice to play with in his musical paint-box, but he’s not restricted by the lack of orchestra. Moments to listen out for are the swirling, disordered waters at the beginning (lots of tricky triplet cross-rhythms for us), the sparkling lights, and the magical ending, when the living soul of man emerges bold and proud from the mist.

Copland holds his story together with a mezzo-soprano solo, who has to play the parts of both God and the narrator, the solo voice emerging from silence, and instructed by the composer to sing ‘in a gentle, narrative manner, like reading a familiar and oft-told story’. But although this is what Copland wrote at the head of the work, his words to a student choir at Brown University in 1980 also give a wonderful flavour for how the piece unfolds:

‘Creation was quite a stunt, so make it grand. Don’t be pathetic about it. What happened after creation is an entirely different story!’’