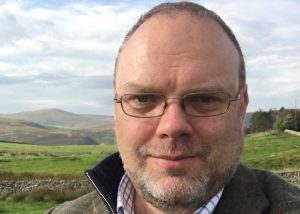 Julian Wright has been Musical Director of the Durham Singers since 2007. He talked to us about his musical background, how he puts together our choir repertoire, and how he balances his role leading the choir with his day job as Head of Humanities and Professor of History at Northumbria University.

Who were your musical influences growing up?

I think I’ve tended to be an explorer in music – and was lucky to have various people who encouraged that along the way. My Dad when I was little; various piano and organ teachers who introduced me to contemporary music and to the style of good period instrument playing as well as helping me learn how classic work from Bach to Brahms really hangs together; among choral conductors, Edward Higginbottom and Andrew Carwood – very different! – both inspire me. Many of my big inspirations sit outside the choral world, and I guess the way I think about music probably owes more to orchestral and chamber music and the way ensembles and conductors interpret a score than it does listening to choirs (though I do a lot). So I am very inspired by conductors or pianists who can show the whole arc of a piece, like Haitink or Maurizio Pollini, which takes virtuosity as well as enormous commitment to the work as a whole, not just to the beautiful pages that make up a piece of music.

You’ve been a singer and an organist as well as a conductor: what’s your own musical journey?

In 1978 I was taken to sit in the college orchestra in Cambridge where my Dad was chaplain, in the trombone section: they were playing Dvořák 9. I was singing the tunes for several days. So I was started very young on the violin, then played clarinet a bit, but the piano / keyboard really took off and as a teenager I was very focused on that. Singing was important too and to an extent acting, and I had a lot of opportunities to explore Lieder and Mozart operas in my early twenties, as well as singing in professional choirs. I enjoy singing still but artistic programming and musical direction was always slightly the most important thing within all those activities.

And how did you end up becoming an academic historian?

I taught in a school for three years in my early twenties while ‘making up my mind’ and then I ‘made up my mind’ to go back to university for doctoral research, because there were intellectual questions and challenges in modern history that fascinated me. And there still are; they relate to the experience of individuals at the crossroads of life, culture and politics, and the way their stories reflect the complexity of their presence within overlapping worlds.

Like many of us in Durham Singers, you balance a demanding career with music – how do you manage the work-choir balance?

I need to be well prepared to feel confident with what I’m doing, so I have to prepare a long way ahead with our choir plans so that I can switch into music mode on Mondays feeling happy and positive with what’s coming up, rather than panicked! Sometimes seems to work anyway!

And if you have any free time after all that, what do you enjoy doing?

I like the air and moorlands of Northumberland and I like listening to and talking about all kinds of art music. Preferably with wine and with friends. I like cricket in the same way I like Wagner – I love the slow building up of drama!

How do you go about choosing the music for a concert?

At different times of year, our programmes have different moods. Within that I tend to start by thinking of a ‘main course’ piece of music, something we’d really like to get our teeth into and that can help the programme ‘stand up’. Then I start to explore associations and connections across different periods. So a couple of years ago I wanted to do the Britten Hymn to St Cecilia and was meditating on Britten writing it on the boat travelling home from New York in the middle of the Second World War, so I started to think of trans-Atlantic connections, and we programmed American music by Barber with a setting of Yeats and some lovely Stanford. But then I spend a lot of time playing with different ways of ordering the programme and pulling different pieces into the mix, focusing in particular on tonal connections between pieces so that one can make a programme which jumps between different periods, but where the coherence emerges through the connections between the harmonic frameworks, giving the audience a real sense of the logic of the programme.

You’ve introduced a lot of contemporary repertoire to Durham Singers programmes: why do you think it’s important for us to sing new music?

There’s the essential principle that if we don’t perform the music of our time we are saying that our hopes for the future of music-making are confined to art that has already been created. There’s the very easy answer that there is an absolute avalanche of fantastic music being written right now, and some of the best of it is written by composers who have an understanding of the choral music of the last five centuries, but who have an authentic, fresh, if not avant-garde, set of musical ideas of their own which define their own voice. There is a lot of contemporary music that I don’t programme, because we’re a choir of generally grown-up voices, and we sing best when we have strong lines to sing. Some contemporary choral music is written to suit choirs that easily adopt an ethereal sound: music with chord-clusters and ultra-high soprano lines.

When you’re not preparing repertoire for Durham Singers, what do you enjoy listening to?

I am voracious for art music of all kinds. Beethoven is the most important composer of all for me. I still love Dvořák 9. I can listen to Olly Knussen’s music on loop. My morning drive playlist has Bach cantatas, Mozart piano concertos, arrangements of Bach for viol consort, Haydn, Gibbons, chamber music by Schubert, Tchaikovsky, Corelli.

What do you look for when you’re auditioning a new singer?

I am not looking for one precise set of attributes because the choir is made of people who bring different musical experiences and skills. I am probably looking for really strong skill in one area, but that might be vocal quality, or musicianship (sight-reading, breadth of experience), or adaptability. We have ex-Cathedral choristers, people who’ve moved into the chamber choir world having sung in larger choruses, professional instrumental teachers and several who have conducted choirs of their own! I do hope to be able to hear someone who is prepared to find the core of their voice in the audition, however, and sometimes I think I can hear something that will bloom if we can support them over time. So that’s also about being prepared to work physically and adapt to the technical thoughts I try to share.

What’s been the highlight of your time with the choir so far?

As musicians we’re only ever, I think, as good as our next performance, and I often feel the most important achievement is the one we are about to embark on… Partly that’s because music, by its very nature, is not static, to be observed in a glass case, but is constantly moving on and moving you on as well… Our St Matthew Passion in 2013 was a performance of enormous intensity that made a deep impression on audience and performers alike, and while St Matthew performances can often be said to have that effect, I think we genuinely went into a different artistic and emotional ‘place’ in the second half. That was down to the intelligence of our orchestral leader in helping to bring life to the ideas I had for the piece, the commitment and courage of the young soloists, the astonishing dramatic ability of the Evangelist, and the choir’s compelling conviction which rang down the Cathedral nave.
In 2018 we sang Julian Anderson’s O Sing unto the Lord as well as it’s been sung by any choir (and a Cambridge choir had just released a recording of it) – a contemporary masterpiece delivered really excitingly. Spem in Alium in 2019 was a highlight for our audience I think, but it was a little bit difficult to enjoy at the time because of the concentration required! But it was very exciting to look back on and to recall the sound of the huge chords in the nave of Durham Cathedral.

Is there a piece that you dream of conducting, and why?

I don’t dream (in the way I may have done in my youth!) of conducting big works for orchestra, because there are important technical and developmental things that a good orchestra wants to get from its conductor which I am not trained to deliver; the experience is never going to be as good as it is when working closer to one’s expertise. (But I can share the secret list some time!) However, in the choral and orchestral repertory I always dream of conducting the Brahms Requiem; as indeed I will next year, and I will continue to dream of it for long afterwards.