Julian Wright introduces the music by Mundy and Palestrina that we will be singing in our ‘Crown of Glory’ concert on 28 March. Tickets and details

Palestrina’s Missa Papae Marcelli is one of the most important landmarks in musical history. Not perhaps because he carved out a new style or a new mode in composition. But the sheer elegance, artfulness and brightness of the work made it a favourite for Papal coronations for centuries, and around it there grew up the legend of the composer forced to write more neat, ‘homophonic’, music, through which the sacred text could resonate clearly. Supposedly, the Council of Trent ordered the change of focus, and the brightness of Palestrina’s setting made the thing come to life. Not long before, of course, in England, Edward VI’s pious Protestant style imposed on composers such as Thomas Tallis a clear, simple vernacular style, sweeping away the florid votive antiphons of the early 1500s. But during the brief reign of Mary, the old style came back, and composers like Parsons or Mundy felt the long winding polyphony of the older generation appeal once more. So between the end of the 1540s and the early 1560s, from Rome to London, there ranged a kaleidoscope of musical styles and languages, with composers cutting their cloth to fit the political and religious times. 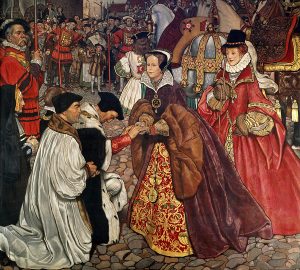 If Palestrina’s mass became known for the crowning of a pope, Mundy’s Vox Patris Caelestis has a fascinating possible connection with the crowning of Queen Mary. Setting a long Latin poem that adapts texts from the Song of Songs (which Roman Catholic devotion had often made into hymns for the Virgin Mary), Mundy’s great setting takes almost 18 minutes and draws out the colour of the text in subtle shades that rise to a great symphonic climax at ‘Veni’ – come, O beloved! What connection might the work have had to Queen Mary? While we don’t have any precise record, we do know that the piece was composed during her reign (it could not have been written under Edward, and Mundy was too young to have written it under Henry VIII). Musicologist John Milsom explains that Mary’s royal entry into London on the eve of her coronation was marked by a pause at St Paul’s Cathedral School, where a great anthem was sung. It’s hard to imagine a more fitting occasion – even one of the great Marian feast days – for this extraordinary masterwork, setting the text of a fairly obscure Catholic priest, William Forrest, known to have praised Mary in other texts, for her virtues and constancy. Mundy shows off the older Renaissance style in which polyphonic lines are built up in nine sections, each starting with a smaller group of singers before bringing together the full forces of the choir, stepping up the drama with each new movement. Not long after, his contemporary Palestrina was sewing together the radically different, neat, luminous setting of the Mass that was named for one of the shortest-lived Popes (though one known to have insisted on quality music-making), Marcellus. And to celebrate the Saint whose spirit lay behind these complex political and musical offerings, we will begin the concert with two contemporary Marian settings, one by Francisco Guerrero and another by the English Tudor composer Parsons – his very popular Ave Maria.

The Crown of Glory