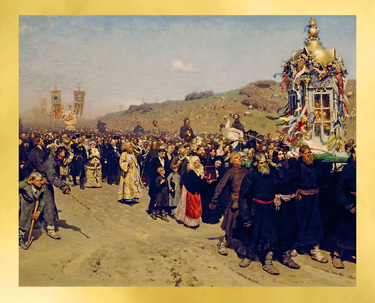 Readings:
From Easter Eve by Anton Chekhov
From Notes from the House of the Dead by Fyodor Dostoevsky
From Resurrection by Lev Tolstoy
From Across the Moscow River by Roderic Braithwaite

Fifteen dark jewels embedded in a black velvet robe soaring from the altar in front of us to the firmament above, these fifteen motets of Rachmaninov’s All-Night Vigil yield his finest (and his own personal favourite) work, a revolution in Russian sacred music, and an overwhelming listening experience. ​
​
Its pertinent timescales – musical and non-musical alike – are intriguing. How long it was in gestation we do not know, but for the composer an important timescale is that it was written down in a mere two weeks in the winter of 1915, much of it reputedly on train journeys between fund-raising concerts that Rachmaninov was giving in support of Russia’s war effort. For the musicologist, that fortnight’s intensive labour proved sufficient for a single work to draw Orthodox sacred music into the twentieth century. For the cultural historian, Rachmaninov’s decisive intervention in a centuries-old musical tradition enjoyed barely three years’ flowering before that tradition’s Holy Synod was itself swept away in a political, rather than musical, revolution. For Western audiences, the work might as well not have existed for the fifty years separating its composition from the first availability of recordings in the 1960s. For the performer, the complete absence of time-signatures in some of the movements, and irregular bar lengths scattered throughout, preserve the solemnity of ancient chants within modern lyrical metre. For the listener, the mesmeric repetitions, the beguiling refrains successively ascending the diatonic scale, the antiphonal effects, the ostinati and the sparing use of polyphony within a sustained luxuriance of sound, all conspire to suspend our ordinary experience of musical duration. Beyond these, for the penitent – perhaps, in the end, for us all – the blazing fusion of the separate movements into a majestic whole offers us a glimpse of eternity.
The All-Night Vigil was in a sense a response to unfinished business in the form of the earlier Liturgy of St John Chrysostom Op. 31, his first large-scale sacred work, again a series of motets for unaccompanied mixed chorus. The Orthodox Church’s ecclesiastical displeasure at its over-richness, its excessive beauty, was matched by Rachmaninov’s own quite separate artistic dissatisfaction with the work, which had used entirely original thematic material. Ironically, given his indifference to the Church, the solution in the ‘Vespers’ derives largely from his conforming to the Russian Orthodox principles of basing sacred music upon recognised chants (the ancient znamenny as well as the more modern Greek and Kiev chants). Rachmaninov’s sublime handling of this material achieves both a greater thematic unity across a symphonic compass and a soundscape that successfully blends the luxuriant with the austere. Nine of the fifteen numbers are based on authentic chants, and the remaining six are original material presenting his own interpretations of the undulating, stepwise motifs characteristic of Russian church music – what he himself referred to as ‘conscious counterfeits.’ As Barrie Martyn points out, Rachmaninov treats even the authentic chants ‘not as untouchable antiques but as thematic material to be moulded with the greatest plasticity.’ This derivation from chants is a technique that he used successfully elsewhere, for instance in the First Symphony; and more generally their influence can be heard in that stepwise melodic movement driving so many of his ‘big tunes.’

Western listeners have come to associate Russian art-music with the symphonic elaboration of folk tunes, and among his contemporaries Rachmaninov was alone in (ostensibly) neglecting them. Yet there are continuities between folk tunes and sacred chants: both represent long-lived vernacular traditions having in common the importance of familiarity, simplicity, memorability and being originally sustained in oral rather than written practices. Rachmaninov happily turns sacred chant into dance when he uses the znamenny chant from the Vigil’s dramatic centre, the ninth movement (Blagosloven yesi, Gospodi, Blessed Art Thou O Lord) in the last of his Symphonic Dances Op. 45. The final minute or so of this, his last orchestral work (1940) is virtually a note-for-note orchestral transcription of the choral movement’s thrilling Doxology. The succeeding choral alleluias are omitted from the orchestral work – but Rachmaninov wrote ‘Allilluia’ at that point in the score!

Folk influence is more explicitly important in the structure and scoring of the Vigil, whose ‘block harmonies’ are regularly interrupted by a form of vocal counterpoint that, unlike fugal or canonic devices, is drawn directly from Russian choral folk singing, in particular that form of improvised descant known as ‘counter-voice polyphony’ (it can be heard in abundance in numbers 2, 4, 5, 9 and 11 among others).

This relative freedom from ecclesiastical constraints evidently reflects the fact that, notwithstanding a deepening personal faith in later life, Rachmaninov was emphatically no churchman. Quite the contrary: he regularly refused to attend confession until the obligatory preparation for marriage rites, at which point he further invited the Church’s displeasure by taking as his bride his first cousin Natalya Satina, in a union forbidden by Russian canon law. (The marriage lasted a lifetime.)

Yet what Rachmaninov may have lacked in liturgical and ecclesiastical authority was, in the genesis of the All-Night Vigil, more than compensated by his devotion to the sound of sacred singing in Orthodox cathedrals and, especially, to church bells, which peal out both here and in many other compositions. In his own words: ‘All my life I have taken pleasure in the differing moods and music of gladly chiming and mournfully tolling bells. This love for bells is inherent in every Russian.’ Bells make notable appearances at key choral climaxes – the alleluias late in no. 9 ‘Blessed art Thou O Lord,’ for instance, and a veritable carillon at Slava, Slava (‘glory, glory,’ said to recall the sound-world of Giovanni Gabrieli) in the opening of Matins at no. 7, together with its relative-minor reprise in no. 12, ‘The Great Doxology.’ Throughout the work, textures and dynamics play structural roles, through which Rachmaninov endlessly re-forms his source material. The tonal ranges are for the most part unremarkable, except for the basses’ regular expeditions down to low Cs and B flats – men with such vocal capacity would be ‘as rare as asparagus at Christmas,’ opined the anxious conductor of the work’s premiere in Moscow in March 1915. The sopranos’ top B flats seem almost leisurely by comparison, although they mark a summit four full octaves above the chorus’s foundation stone, and when – as in the Magnificat – they suddenly soar from nowhere above the lower voices it is, as Max Harrison puts it, ‘as if light pours in, as if the roof had been lifted off the cathedral.’ Such climaxes also emphasise the tenderness of the final phrases that close each number: numbers 12 and 15 end piano, and all the others finish pianissimo or quieter.

The first major composer to die the modern death of lung cancer from smoking, Rachmaninov wanted his favourite movement, no. 5, the Nunc Dimittis, to be sung at his funeral; sadly, it could not be done. The text –”Lord, lettest Thou Thy servant depart in peace” – seems an obvious reason for such a choice, but it is the servant’s musical treatment of his own plea that marks out the movement as special. The tenor’s beseeching solo is framed and sustained by the chorus’s lilting, rocking couplets, as though metering out the penitent
’s last moments.

Too fanciful? Perhaps. Music is not a representational art, but sometimes our imaginations need pictorial release from music of such depth and intensity as the Vigil. Listen, then, to dark jewels glowing in velvet; to pealing bells; to the sound of rapturous light pouring in through a vanished roof; and to a cradle, rocking quietly at the centre of the universe.