Sing Unto the Lord 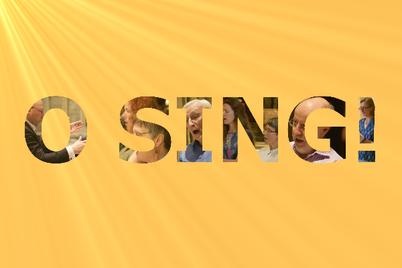 The joyful exhortation to lift our voices and sing praise to the Creator is found in several of the psalms and has inspired composers from the earliest times. Our recital on 30 June leads up to one of the masterpieces of choral music from any era, J. S. Bach’s Singet dem Herrn, BWV 225. As we look ahead to our visit to Germany this September, as part of the twin-town cultural exchanges between Tübingen and Durham, the programme has been chosen partly to celebrate the diverse European musical culture of the seventeenth and eighteenth centuries, with joyful psalm-settings and organ pieces by great composers of the English and German Baroque. We also present two contemporary masterpieces by James MacMillan and Julian Anderson.

Bach’s motet takes the compositional techniques of earlier generations and develops them with advanced virtuosity. Like the pieces we sing by Schütz and Pachelbel, the singers are divided in two groups and they answer one another, sometimes lightly and liltingly, as in the joyful opening, sometimes contributing to a massive climax of complex choral textures, as in the third section, and sometimes fulfilling different roles: in the beautiful second movement, the second choir sing a verse from the chorale ‘Nun lob mein Seel den Herren’ (the second verse, ‘Wie sich ein Vater erbarmet’), while the first choir sing beautiful free-composed answers. But Bach had moved on from the homophonic exchanges of choral sound, bouncing texts from one side of the building to the other, that is so characteristic of Schütz. Schütz had developed this polychoral style from the masterpieces of the early Italian Baroque and the dramatic effects achieved in St Mark’s Venice by Gabrieli. Bach, while honouring that tradition, added the violin virtuosity of Vivaldi, giving the singers highly complex contrapuntal lines, and weaving into the texture important fugal motives, notably in the first movement at ‘Die Kinder Zion’, which gets passed triumphantly around the choir.

The chorale ‘Nun lob mein Seel, den Herren’ (with text paraphrased from Psalm 103) was widely used by German composers before Bach. Francesca Massey plays two preludes on the chorale by great organists of older generations, Buxtehude (about 50 years older than Bach) and Praetorius (writing much earlier, at the turn of the seventeenth century). These frame a major motet based on the chorale by Schütz, who is effectively the connecting link between the masters of Praetorius’s day and the time of Bach. Originally accompanied by strings and wind, we perform this work with organ, as we do the Purcell in the first half of our programme. Schütz’s setting of ‘Nun lob mein Seel’ uses the lilting version of the chorale in 3 / 4 time, rather than the reflective 4 / 4 used by Bach. But, as in Pachelbel’s joyful setting of Singet dem Herrn which starts the second half of our programme, there is flexibility and, even in simple word-setting, real clarity and understanding of how to present shifting moods that brings the piece to life in a vivid, direct style.

The settings of ‘O sing unto the Lord’ / ‘Singet dem Herrn’ that form the bulk of our programme pick up different passages from Psalms 96, 98 and 149. In his quietly ecstatic setting from Psalm 96, James MacMillan sets up simple arches of beautiful choral phrasing, lightly ornamented, and turns, in a glorious postlude, to the organ to explore the text’s ecstatic sense of jubilation. Purcell’s verse anthem on the same Psalm includes the central passages that focus more intensely than Psalm 98 on the theme of God’s Lordship over the world and the peoples. This anthem was one of several written for John Gosling, the outstanding baritone and pillar of the Chapel Royal in the 1680s. There is much joyful choral and solo writing in this setting but also a moment of stillness and poignancy at ‘O worship the Lord in the beauty of holiness’, in which the choir, answering an initial prayerful call by a solo quartet, unfolds a phrase that captures the awe-ful worship of the people before the Lord. The contrast this provides after the passages of dance-like music for duet – ‘The Lord is great’ – and before the ebullient invocation ‘Tell it out among the heathen’ is stunning.

There is a close affiliation with the way Julian Anderson handles the unaccompanied choir in his 1999 setting, which weaves texts from Psalm 96 and 98. There is much in this work that might remind us of Purcell or Tippett – bright major-infused harmonies, snappy rhythms and a sense both of drama and unity in the work as a whole. The piece opens with a florid invocation before subsiding into soft harmonies at ‘the voice of a psalm’. Brilliant writing follows, evoking vibrant cornets and the onrushing roar of the sea. But the awe and simplicity that Purcell set at the heart of his anthem is echoed in Anderson’s final section, ‘for he cometh to judge the earth with righteousness and equity’. These phrases, too, open out with space and simplicity, and the work closes on two open fifths, spare and perfect.
Psalm 149 is shorter than Psalms 96 and 98, though it has a rather vengeful tone, as of a choir going into battle. The settings in Bach’s opening movement, by Tomkins (a direct contemporary of Praetorius) and Byrd (the oldest composer we sing tonight, born in 1540), use only the less blood-thirsty opening. Tomkins takes up minor-key modalities to create a sense of fierce jubilation, especially in the chromatic surprises of the closing Alleluia. The sounds of Israel’s rejoicing hurtle around the choir in this seven-part setting, as they do also in Byrd’s six-part Latin setting, with its sudden slip into a dance-rhythm in its middle section. The motet is only a couple of minutes long but it shows off the mastery of the greatest English composer to write choral counterpoint, a fitting herald to our performance of Bach’s Singet dem Herrn.