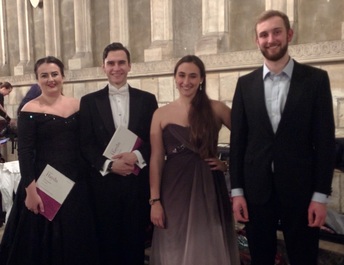 Ana Fernández Guerra (second from right) with other soloists from “The Creation”, Clare Tunney, Bradley Travis and James Quitman.

​Samling Academy soprano Ana Fernández Guerra first performed with us in last year’s cathedral concert, delighting us with her combination of sensitivity and technical agility as she sang the arias for Eve in the second half of Haydn’s The Creation.

We’re very much looking forward to hearing her again this year, when she will be singing the soprano arias in Messiah. We talked to her about Messiah, about Samling Academy, and about working with our professional period instrument orchestra.

When I asked about how she’s preparing the music, she explained how she’s enjoying the opportunity to explore the very different moods and characteristics of the three major arias:
​“’Rejoice Greatly’ is a wonderful showstopper, with lots of exciting runs, then ‘I know that my Redeemer liveth’ feels very personal, the text is beautiful and I feel very connected to it. Then at the end I sing ‘If God be for us’, which is one of the movements that often gets cut, so I’m really pleased to have the chance to sing it. It’s a very conversational aria, with lots of different statements and moods to wrap everything up, so every phrase has something new to say.”

Ana appears with us as a member of Samling Academy, a highly selective training programme for young singers who live or study in the North East – this is her fourth year in the Academy. As well as the intensive performance-based coaching that Academy participants receive, she’s also had roles in two Samling Academy opera productions, singing the part of Emmie in Benjamin Britten’s Albert Herring in 2013 and then appearing in Ravel’s magical and bizarre L’Enfant et les sortilèges as an armchair(!) and a squirrel. Albert Herring was Ana’s first experience of singing opera, and she explained that the biggest challenge was getting to grips with memorising all the recitative passages that are so crucial for putting across the story. She also felt that the professionalism of the Samling productions – the direction, the lighting, the costumes and the thorough preparation – gave her a really good insight into what goes into putting on a professional opera performance.

The importance of giving young musicians the opportunity of working at a professional level is something we share with Samling, and Ana spoke warmly about her experience of taking part in The Creation last year:
“I was excited and amazed to be doing it, but I also felt very well prepared and up to the job, thanks to the coaching I had with Julian Wright and through Samling Academy. Not many people of my age get to say that they’ve had this experience – it’s so hard to get, so thank you so much for inviting me again.”
She explained, too, how she particularly enjoyed working with our orchestra leader Caroline Balding, watching her dynamics and responsiveness, and noticing how the whole orchestra react instinctively to whatever the soloists and the choir are doing.

Ana started off by singing in her school choir and, although she also played the violin, she had decided by the time she started A-levels that singing was where she wanted to make her career, and she hopes to apply to music college in the future. She graduated from Newcastle University with a degree in music in 2015 and has continued to study with Miranda Wright, whose input, she says, has got her to where she is today, both vocally and professionally. She has also been working as a singing teacher at several schools and music centres in Durham and Newcastle. Teaching is something she clearly enjoys, judging from her immediately enthusiastic and encouraging response when I asked her whether she had any advice for Charlotte and Inès, the two younger Samling Academy members who’ll be singing small parts of Messiah in November, including the duet ‘He shall feed his flock’.

“My advice? Enjoy it. Don’t be scared and overwhelmed by the place and the orchestra, because once you’ve sung a note, it’s done, you can’t sing it again, you have to move onto the next one. They’ll have been on the Academy week in October which will help them with the mindset and above all they should really enjoy the experience.”
And finally, something that we should all remember when we’re singing: “If you enjoy it, so will the audience.”

Ana will also be coming along to our Come and Sing Messiah on 15 October, where you’ll be able to have a preview of one of her arias, and listen to her in open rehearsal with Julian.