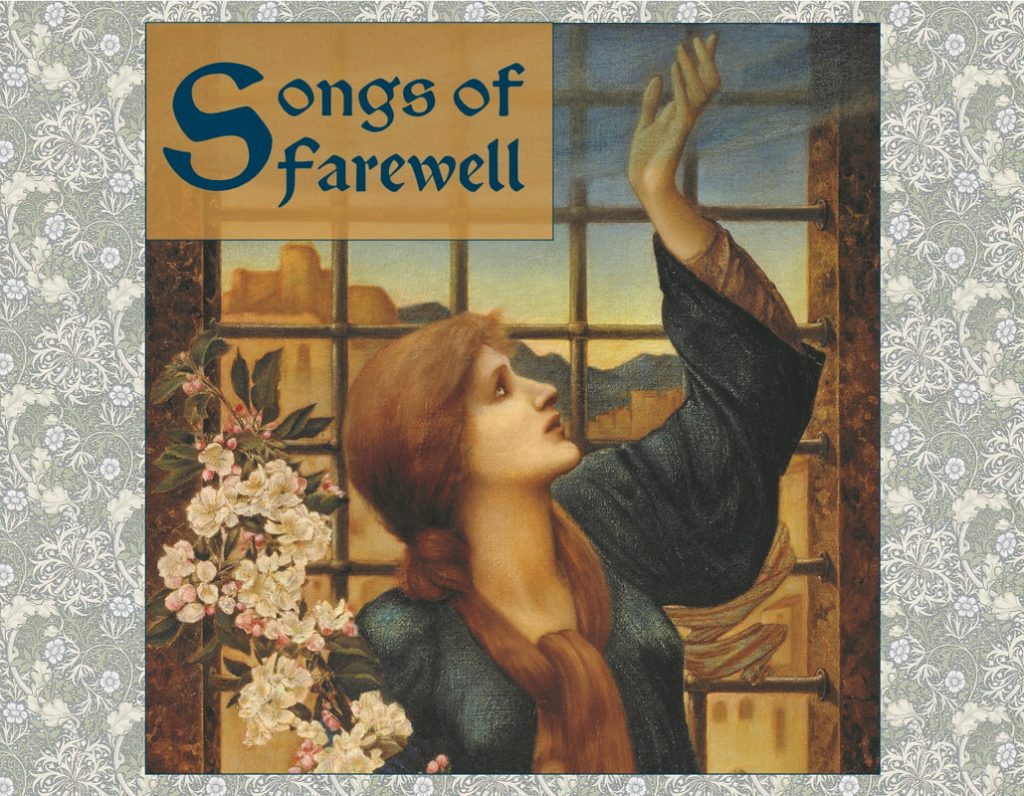 Parry: Songs of Farewell, conducted by Assistant Musical Director Francesca Massey.
(My soul, there is a country; I know my soul hath power; Never weather-beaten sail; There is an old belief; At the round earth’s imagined corners; Lord, let me know mine end)

This recital focuses intensely on absence, loss and the afterlife, through richly scored masterpieces for multi-voice choir from the baroque and the early twentieth century. In the first part of the programme, we draw on two Italian baroque masters in settings of great texts for Passiontide. Lotti’s beautiful and justly popular Crucifixus sets the crucifixion text ‘he was crucified for us under Pontius Pilate’ from the Creed, in a great arch of sound. This establishes the place and focus of our meditation, which is then taken up in a long work for ten-voice choir by Domenico Scarlatti, the Stabat Mater, the poem of sorrow and love that explores the Virgin Mary’s emotional response to the Cross. After the interval, we turn to English composers. Purcell’s prayer of penitence, Hear My Prayer, is structured, like the Lotti, in another great arch of suspensions. This brings us into a new sound-world, that of the English romantic composer Hubert Parry, the centenary of whose death is marked this year, in a performance of his late-period masterpiece, the six Songs of Farewell. ​ Our three baroque masters: Antonio Lotti, a great musical leader in Venice c.1700; Domenico Scarlatti, son of another Venetian composer Alessandro Scarlatti; and Henry Purcell of HM Chapel Royal and Westminster Abbey were born within 25 years of one another. However, because Purcell had died while the youngest of these three, Scarlatti, was still young, we feel the full breadth of the baroque across these three works, from the earlier English chromaticism of Purcell to Scarlatti’s elaborate, richly colourful study in choral virtuosity. Scarlatti’s extraordinary work, scored for four soprano lines and two each of altos, tenors and basses, moves through a sequence of seven movements, each deploying the forces in a subtly different manner. The work dates from the 1710s, when Scarlatti held important positions in Roman liturgical life, notably at the Julian Chapel in the Vatican. The intense drama of the thirteenth-century text clearly appealed to composers of the baroque, seeking through vocal harmony to capture the depth and range of emotion it expresses. Scarlatti’s setting moves away from the poly-choral form of the earlier 1600s, so characteristic of Venice where his father had grown up. His Stabat Mater shows baroque instrumental style in some of its use of the voices, particularly in the lively Amen, but it also looks back to the great Renaissance masters with sinuous polyphony. There are luxurious effects in the weaving together of the four soprano voices. Flashes of drama at ‘dum emisit Spiritum’ (and He gave up the Ghost) contrast with music of intense sweetness at ‘Sancta Mater’. Ten soloists from the choir take up some of the music by themselves, notably in the virtuousic ‘Inflammatus’. The cumulative effect of the work as a whole offers an almost symphonic drive and logic that sets this piece apart. Parry’s Songs of Farewell are important works that show a great romantic stylist turning his focus inward, using the unaccompanied choir as an instrument for personal reflection. The composer was shocked by the First World War, the loss of life and loss of European collaboration that had been so important to him, and his health was also failing. In this set of six devotional songs, we find Parry deploying both his skill as a part-song writer and his command of the symphony. You hear the former in ‘Never weatherbeaten sail’, a five-part setting of perfect balance and beauty, or the conversational answering phrases in ‘I know my soul hath power to know all things’. There are harmonic surprises in the first two songs, a sense of looking around the corner to new, perhaps troubling or perhaps uplifting possibilities. The fourth, setting the nineteenth-century poet J. G. Lockhart, is more like a steadily unfolding hymn. Here, Parry expands the texture to six voices and the plainsong of the Credo comes to the fore, an insistent reminder of the spiritual focus that sits behind the set as a whole. Apart from the final piece, Parry preferred earlier poets: Henry Vaughan, John Davies, Thomas Campion and John Donne. But Donne’s sonnet drew Parry away from the gentle madrigalian style that seemed to suit Vaughan or Campion’s poetry into a work of huge scope that really lays out the different scenes and emotional responses contained within the sonnet. From the trumpets of the opening to the ethereal ‘you whose eyes shall behold God’, the choir, now in seven voices, explores the meaning of the resurrection with remarkable grandeur, before a gentle, humane closing sequence follows the sonnet’s turn back to personal repentance. In the final work, setting Psalm 39, Parry develops his structure in a very different way, using two choirs of four voices that develop each other’s musical impulses. The mood is overwhelmingly contemplative, in spite of the outburst ‘I am even consumed by means of thy heavy hand’. Parry extends the final words ‘Oh, spare me a little, before I go hence’ over several pages, bringing the cycle to a deeply moving and intensely personal close. ​Julian Wright, March 2018