Spem in alium started out in my mind as a mountain to be admired from afar – a Siula Grande of the choral world. Yet networking drew me into a first attempt on the unattainable in 1973, when a chorus from Stockton-on-Tees and another from Gosforth in Newcastle managed to cover thirty parts, along with ten friends gathered from highways and byways to fill in the rest and another to play the thorough bass. We committed to a performance in west Newcastle and another at Darlington, both to be conducted by an ambitious North-Yorkshire keyboard player. He directed the first full rehearsal on the night before Newcastle and then telephoned the following morning to report a bout of sciatica. The performances went ahead under the Stockton chorusmaster: both ground to a halt between bars 55 and 60. (There are 138 bars….)

By 2003 I was ready for another attempt at the summit. The Northern Sinfonia Chorus named me as the choir 7 tenor in its one-voice-per-part performance without thorough bass, and Alan Fearon, the chorusmaster, ran the attempt as a military campaign. Gradually the elaborate syncopations were mastered and the music’s alternate plaintiveness and defiance emerged. Simon Halsey did not excuse himself as conductor at All Saints Church Newcastle and a definitive performance resulted. Later that year I was thrilled to hear an exuberant section of the work as soundtrack in the film “Touching the Void”, playing as Joe Simpson and Simon Yates reached the summit of Siula Grande.

Thomas Tallis is a remarkable figure in the music of Britain. His use of key signatures and rhythms were more assured than those of this predecessors and contemporaries at accentuating the meaning and flow of words, easing Britain’s elaborately decorated, long-winded plainsong towards the concise polyphony that had taken root in continental Europe. His influence on English choral music owes as much to his ability to keep his thoughts to himself as to his musical genius. In 1531, Henry VIII’s campaign against papal authority had begun: the continuous religious strife and persecution was to prevail throughout Tallis’s life and blight the career of many a musician.

The first precisely dated event known for Tallis’s life is his appointment in 1530 as joculator organorum (organist) of the poverty-stricken Dover Priory, although a manuscript of one of his compositions predates this appointment. He was not on the payroll after 1531; in 1535 the Priory was dissolved. In 1537 and 1538 Thomas Tallis was being paid as one of the musicians at the prosperous London church of St Mary-at-Hill. By the autumn of 1538 he was senior singing man at the extensive Waltham Abbey, where he served until its dissolution in 1540. From 1540, Tallis was in the county of his birth as a vicar-choral at Canterbury Cathedral until headhunted in 1543 by Henry VIII to become a Gentleman of the Chapel Royal. There Tallis stayed and survived under Henry and the following three dangerous reigns. He married in 1554 and had no children; his wife Joan outlived him by four years. They were buried at Greenwich in the Church of St Alfege.

Spem in Alium is such an adventurous work, and its origins are documented so tenuously, that it prompts copious speculation. Was it commissioned to honour a reigning queen’s fortieth birthday? If so, which queen: Mary or Elizabeth? Where was it first performed? How were the singers arranged? There is a reference in a 1596 library catalogue from Nonsuch Palace (1538-1683) to a manuscript that was either the original score, or a copy. Nonsuch Palace itself had an octagonal banqueting hall, with four first-floor balconies, making it a plausible location for performing a piece written for eight choirs. A letter from 1611 links the piece to the Duke of Norfolk and a London performance before 1573 at Arundel House, saying that the Duke had heard a multi-choir piece by the Italian Alessandro Striggio and speculated whether an Englishman could equal this. The Duke’s wife came from the Arundel family, who were the owners of Nonsuch Palace, so pieces of the jigsaw do fit together.

What we do know is that Elizabeth I’s successor, James I, had the music copied from the Nonsuch manuscript, with a patriotic poem in English as underlay. The poem was inserted for a performance of the motet at the investiture in 1610 of James’ first-born son, Henry Frederick as Prince of Wales and the investiture score survives. At the end of it, the copyist added separately the Latin text, ‘Spem in Alium’, from the 1596 score, but there is no surviving manuscript of a score with the original Latin text as underlay. The fate of the Nonsuch manuscript is unknown, and there is no firm evidence relating to any performance in Tallis’s lifetime. Careful scholarship has reunited the original underlay and music to produce, through editions in 1888, 1966 and 2010, the miraculous piece sung in the present day.

In 2017, a search for links to the life and times of Thomas Tallis took me firstly to Dover. The name of the twelfth-century Dover Priory is preserved in the port’s railway station and the Priory’s surviving buildings nearby are well cared for by Dover College, a private school. A blue plaque at the south-east gate commemorates Tallis’ time there. 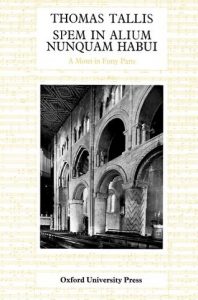 Traces of the 14th-century St Mary-at-Hill Church survive against all odds. Its remains, 150 metres northeast of the monument to the fire of London in 1666, were incorporated in a graceful Wren reconstruction, which had to be re-roofed after a 1988 fire. I learned that the Tallis Scholars rehearse there regularly.

Waltham Abbey was once the London repose of the Bishop of Durham: its Norman nave (1090-1150) is now an Anglican church – a striking reminder of the nave of Durham Cathedral. The footprint of the Church is less than one quarter of the footprint of the Abbey at its 14th-century peak. In 2017 the Church’s wooden ceiling (1859) had just been magnificently restored. A brass plaque by the organ’s nave console commemorates Thomas Tallis and the church interior is shown on the cover of OUP’s massive full score of Spem in Alium.

I have scheduled a visit to Greenwich later this month.