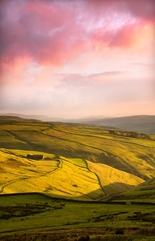 In tonight’s programme, we continue the celebration of our precious world, which we set up last autumn with our performance of Haydn’s Creation in Durham Cathedral. From a colourful and vibrant setting of the first chapters of Genesis by Aaron Copland (1900–1990) to an introspective exploration of the human mind as a home for ‘th’ infinite Creator’, this programme takes us on a journey that starts in the great outdoors of the narrative of Creation in the Bible, and works its way through mountains, rivers, light and darkness, into the humane, intimate experience of man in Creation.

The beginning and end of this journey, from the grand drama of Copland’s description of the whole world, to the slow-moving, subtle harmonies of Howells’s House of the Mind are framed within a precise moment in musical history – the middle of the twentieth century. From 1947, Copland’s jazzy rhythms and innovative choral writing point to exciting new techniques and colours that later choral composers have deployed to innovative effect. Many decades later, Judith Weir (1954–) made a setting of e. e. cummings’s ‘a blue true dream of sky’ which seems to echo the open-spaced chords and triplet rhythms that Copland used in his cantata for unaccompanied choir and solo, In the Beginning; and the way Weir’s soprano solo (sung today by Hester Higton) skates bluesily above the choir recalls the earthy gospel rhythms that our visiting mezzo-soprano Marnell Blair has to deliver in the Copland.

Weir’s homage to the Highlands, a landscape poem for organ, Wild Mossy Mountains (listen out for crags, silver fountains, whistling winds and heather), is just as evocative in its modern musical take on landscape. It is appropriate that this modernist exploration of landscape, in the first part of our concert, should culminate in the second performance of Janet Graham’s stunning setting of Gordon Hodgeon’s, ‘The Light’. Graham (1948–) has composed wellspaced and fresh harmonic pictures that draw us through darkness to a glowing celebration of morning.

Copland, writing for a special American university occasion in 1947, sets us on an extrovert journey of celebration – of mountains, light, sky and creation as a whole – looking forward to the twenty-first century. But the second half of our programme, which concludes with a 1953 masterpiece by the English composer Herbert Howells (1892–1983), looks inward.

Brahms (1833–1897) produced part-songs for choir throughout his career. These late settings explore the feeling of being alive in a landscape that is full of hidden meaning. The harmonic pictures in Brahms’s late choral and solo songs hint at the way in which humans learn to reflect on their past, through landscape and memory. When we are alone, searching for answers, music intervenes through the evocation of the natural world around us. Brahms had a lifetime of musical experience behind him when he captured this feeling of the romantic individual in the landscape in his op. 104 part-songs. The British composer Finzi (1901–1956), writing only half a century later, had steeped himself in the poetry and landscape of England to such an extent that his part-songs were a real continuation of that romantic tradition. ‘Clear and Gentle Stream’ asks questions about how we relate to our past and to our present, and Finzi uses romantically-sculpted musical lines to describe the lost days of summer, keynotes of our experience of love and memory. The English romantic mood as expressed by the organ answers Finzi’s landscape painting in a more abstract vein, with the lovely Folk Tune of Percy Whitlock (1903– 1946).

Howells’s The House of the Mind, written in a golden period, the early 1950s, when he was also composing his most successful Evensong service (for St Paul’s Cathedral), his Coronation anthem Behold, O God, our Defender and several other major works for choir, reflects his mastery of the long lines and exquisite harmonies that choirs love to sing. This exquisite motet evolves at a stunningly slow pace. Its harmonies expand powerfully, allowing Beaumont’s poem to unfold its subtle exploration of the human mind, in a study of deep, quiet beauty.

The poetry that is set by Howells and Brahms asks: are we patient enough with ourselves to remember that, in spite of everything, we too are creatures of great beauty? Do we understand what it means to be blessed with minds that are complex enough to think through the implications of Creation in all its complexity? Howells’s mindscape is a reminder of that most beautiful element in nature – the human mind. ‘Say not that this house is small, girt up in a narrow wall.’ Howells’s setting catches a mood of wonder as we reflect on how our minds encounter the sheer breadth of the universe. His long-breathed phrases and rich harmonies penetrate the mystery of how the world has evolved an organism that can make the effort of understanding and describing the universe.

The music we sing today celebrates our world in different registers. From Copland we move on to Weir, Graham, Finzi and Brahms, exploring the way 5 our lives are affected by our encounter with the world. As our concert concludes, however, we ask how to celebrate the human mind. In its intelligent reflection on the universe, our mind gives the world many layers of meaning. When our minds encounter the world, Beaumont says (and Howells’s stunning music gives the right amount of time and depth to help us think through these complex ideas), the world is changed. It is no longer a rock in space; it is ‘our world’. We need music and poetry to help us understand what that means.

I first met Gordon in 2010 in the Rehabilitation Unit at The Hawthorns, Peterlee, where I was working as music therapist. After some unsuccessful operations on his spine he was unable to move his limbs, often needing a ventilator to help him breathe. In our first session he told me he liked classical music and that he had sung in a choir, but singing was now difficult for him because of his breathing problems.

As Gordon was not able to access any of the musical instruments in my collection, ‘mainstream’ music therapy was not going to be possible but, because music was obviously important to him, I decided to offer him weekly sessions and find a way we could work together. We listened to a wide range of music, talking about it afterwards, and also discussed literature. On one occasion I read some poems to him from a book a friend had brought as a present, as he was unable to hold it and turn the pages.

Gordon was a published poet himself, and he must have found it deeply frustrating and depressing that his physical disabilities were now making it impossible for him to write. Creativity was so obviously at the centre of his being. I encouraged him to keep composing poetry, offering to act as his amanuensis, and he soon set to work. He would hold the first drafts of new poems in his memory until I could write them down from dictation during our sessions together. I typed them up afterwards and printed them off so that they could be placed in front of him for reading and editing. Later, Gordon was equipped with a voice recognition computer programme and I was able to copy the poems from a memory stick onto his laptop. From this point Gordon was able to write and edit more easily and the collection of new poems soon grew.

Although he often became tired, and had several bouts of illness and hospitalisation, Gordon worked at the new poems and also revisited some older ones, and put together a new anthology, Still Life, which was launched at The Hawthorns in 2012. Shortly after that he was discharged and went to live with one of his daughters and her family, and since then he has published two more anthologies of poetry.

Unfortunately Gordon has now lost the power of speech and is dependent on a ventilator to enable him to breathe. He uses a system of eye-blinking to communicate, letter by letter, and this is often hindered by frequent eye infections. As he has recently said, ‘Poems come very slow.’ The creative urge is still there, though.

While working with Gordon I asked him if he would like me to set any of his poems to music after I retired from music therapy and had time to compose, and after some thought he showed me ‘The Light’. He said he could imagine the two words, ‘The Light’, repeated throughout the piece as a sort of choral drone, with individual voices coming in with the different lines of the poem.
The form of the poem and its appearance on the page immediately suggests a structure similar to the one Gordon imagined, though I departed from it in some ways. I decided to keep the two words as the backbone of the piece but to allow their music to evolve and shift pitch rather than repeating the same musical phrase. The two words also move around the whole eight-part choir, with the other voices weaving in and out with the different phrases of the poem.

These phrases cover a broad canvas of life and the world, and people familiar with the Compline Office Hymn Before the ending of the day might recognise a snippet of plainsong in the altos, about four minutes into the piece.
(c) Janet Graham, July 2016