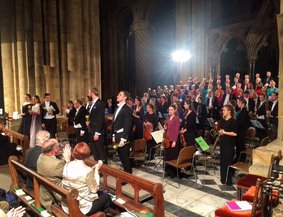 As part of our outreach programme, we took Haydn’s music into local primary schools, where the children worked on art projects inspired by Creation and learnt some of the music to sing with us during our afternoon rehearsal. One of the highlights of the day was hearing them explaining to us the differences between recitatives, arias and choruses, and singing “The Heavens are telling” with such joy.

Read more and view some of the artwork

Haydn’s oratorio The Creation was one of the first truly international masterpieces. It was always Haydn’s intention to give the work to an Austrian audience as well as an English one – but rapidly it was being performed all over Europe. Later, in the nineteenth century, it fell out of favour in some circles. Perhaps the pictorial sound-imagery came across as a little obvious, a little ‘Disney’ one might say nowadays, for later audiences more excited by abstract romantic themes. But in the late 1790s, Haydn’s musical story of the making of the world, told through the medium of three soloists representing angels, placing humans at the heart of the story with Adam and Eve, with a chorus that celebrated each episode in songs of praise that drew on well-known psalms, and with genuinely inventive and colourful use of the orchestra, transfixed Europe’s imagination. Europe’s most admired composer found his work taken up with unprecedented delight and enthusiasm.

The rush to perform the work in 1798–1800 causes complex issues for performers today, notably in choosing which language, and which edition, to perform. The text we sing tonight reproduces the precise English phrasing that Haydn set. This text has often been seen as an awkward paraphrase of the German. The English libretto dates from the 1740s, and Haydn acquired it on one of his visits to England (several other English creation librettos, drawing on Milton, were produced in the 1740s and 50s). Having been blown away by a huge staging of Messiah in Westminster Abbey, Haydn wanted to do something similarly grand and was excited to have a text from a writer who had known Handel. Neil Jenkins suggests that the author of the English text was probably Jennens, who wrote the text for Messiah. Jennens was deeply familiar with Milton’s creation narrative, and with Shakespeare, which explains many old-fashioned turns in the text. While, in Handel’s day, a libretto such as this might have been tweaked and developed, with English musicians on hand to comment, when Haydn took it home he and his colleague van Swieten had to do what they could to adapt Jennens’ text as non-native speakers. But the sometimes archaic imagery points back to images of the natural world in eighteenth-century English poetry, in Milton and in Shakespeare himself.
The story as it is told in the oratorio draws on an even older tradition: celebrating the creation of an ordered universe was vital in medieval theology. We hear this at the very beginning, when after the chromaticism and drama of the ‘Representation of Chaos’, light hits us with a blazing perfect cadence in C major, the orchestra playing without mutes for the first time in the oratorio. C major sounded especially clear to eighteenth-century ears – it is the key of the stars in ‘The heavens are telling’, and of Adam and Eve’s song of praise. But the cadence itself describes harmony imposed on chaos. Here is a world in which a sub-atomic ‘soup’ has been transformed into working physical forces, giving light and – following Milton – banishing the demons, who fall out of heaven in the opening tenor aria and chorus.

Our orchestra tonight is smaller than some of those used by Haydn, though it employs all the instruments he chose. Size of orchestra varied in the eighteenth century. Smaller forces worked well in the echoing marble palaces of Vienna, and a contemporary critic insisted his favourite performance of The Creation was one played by a small string ensemble. Conversely, by the 1790s, ‘monster’ performances of Messiah were becoming regular in London, with over two hundred performers. Mozart loved working with large string sections when he had the chance. Haydn was attracted by big effects, and that is why the bass trombone and contra-bassoon are so important in The Creation; their parts were added to underpin music that was supposed to have impact. The piece could live with different acoustics. It brought together the compositional skills of an exceptional symphonist as well as a very experienced opera composer, a master of the string quartet who was exploring the combination of choir and orchestra as a new musical force for the future.

The instrumentalists we have invited to Durham for this performance are specialists on instruments that reproduce the timbres and sound quality of instruments from Haydn’s day. The overall balance of a ‘period’ orchestra such as this is excellent for a chamber choir. Trumpets and trombones are quieter than modern brass and thus the big effects in the wind section can be heard evenly balanced across the orchestra. The flavours of the woodwind are more developed, but they also blend as an ensemble in a quite unique way – you can hear real eighteenth-century ‘wind band’ music, straight from the aristocratic court bands of Vienna, especially in the trio in the final chorus of Part 2. The style that comes naturally when string players use replica bows and violins is also, we hope, an inspiration to chorus and soloists to sing with life and plenty of attention to the lively consonants of the text.

This work brings to life vivid images of our world and the exquisite balance and harmony that hold it together. If the beautiful overture to Part 3, depicting life unfolding in the Garden of Eden, doesn’t remind us of how delicate that balance is, and how carefully it needs looking after, I don’t know what will. This term, six schools around County Durham have been exploring the way music and visual art intersect in Haydn’s oratorio, through mosaics led by the local artists Amanda Cuskin and Angela Tomlinson. The schools involved also gave their younger children a chance to sing with us this afternoon, in an informal performance of Part 1 as part of our full rehearsal. This most lively piece of music commands our attention two hundred years later as vividly as it did in 1798 and will, we hope, inspire new generations of musicians in the future