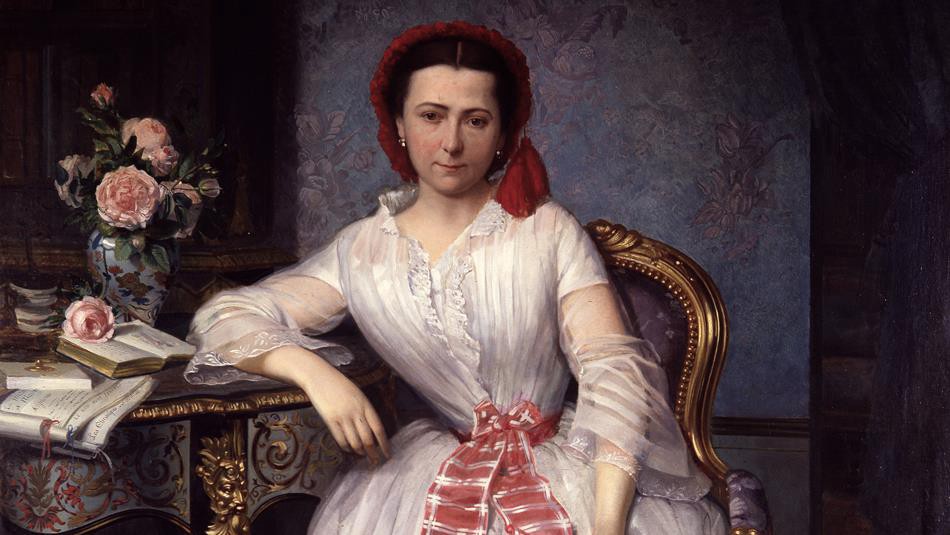 The life of Joséphine Bowes begins as a familiar nineteenth-century story: rich, playboy aristocrat meets a pretty young girl from a lower social class, and makes her his mistress. Sometimes these stories end tragically, especially in novels, but in the real-life fairytale of Joséphine Coffin-Chevallier, she was lucky enough to become the mistress of a man who loved her, who shared her passion for the arts, and who, after a few years, actually married her. It might have helped that John Bowes himself was the product of a similar liaison: his father was the 10th Earl of Strathmore and his mother was one of the Earl’s housemaids. John’s parents did eventually marry, the day before the Earl’s death, thus allowing him to pass his wealth to his son – but because he’d been born illegitimate, John was not allowed to inherit the family titles.

Joséphine was born in Paris, the daughter of an actress and a clockmaker. She followed her mother’s career, and was working at the Théâtre des Variétés in Paris when she met John Bowes, who owned a share in the theatre. Having inherited his father’s wealth, John had developed significant business interests in coal and shipbuilding in the North East, and had served as a Liberal MP for South Durham and as High Sheriff of Durham. Despite all this, it is suggested that he moved to Paris because his background of illegitimacy meant he never felt fully accepted in the high-society of Victorian England.

Joséphine made good use of her new fortune and status: she became a patron of the arts, and developed her taste and knowledge by hosting artists, musicians and writers: it was said that her salon was the most brilliant in Paris. She was noted for being at the forefront of fashion, and she also became a competent artist herself: she had paintings exhibited at the Paris Salon and the Royal Academy. Her good eye and her wealth of connections in the art world led her to start collecting, and she possessed a knack for spotting young artists before they became famous. It is this world that we turn to in the second half of our concert; the two part-songs by Saint-Saëns, that reflect on how the wonders of nature and beautiful things made by human skill can move us and console us seem particularly suited to Joséphine’s world.

Before long, the passion for collecting art that John and Joséphine shared developed into a grand project: to improve the lives of people back in John’s County Durham home by sharing great art and beautiful things with them. She sold her jewels and the chateau that John had bought as her wedding present, and took in earnest to building a comprehensive European art collection, buying important contemporary pieces from major exhibitions and building up a mass of treasures from across the centuries, and to building a new French chateau in which to exhibit them. The result was The Bowes Museum, which stands so incongruously in its little County Durham market town setting. Joséphine laid the foundation stone in 1869, but was already seriously ill, and probably realised she wouldn’t live to see the museum completed, saying ‘I lay the bottom stone, and you, Mr Bowes, will lay the top stone’. Sadly John too died before the museum was completed, but between them, John and Joséphine had done so much that a board of trustees was able to complete the work and the Bowes Museum opened to the public in 1892.

As we take our musical tour through some of the highlights of Joséphine’s collection first on 22 June when we have the privilege of singing in The Bowes Museum itself, surrounded by her treasures, and then again on 6 July in Brancepeth, we celebrate not just her exquisite artistic taste but the generous vision and energy that led her to become the first woman anywhere to found a public art gallery.