The Night in the Garden: Allegri Miserere 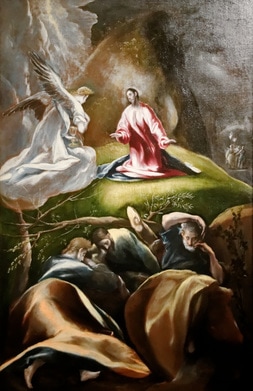 Our Passiontide programme “The Night in the Garden” is the story of the intimate human dramas that unfold on the last night before Jesus’s crucifixion, as told in music by some of the greatest composers of the Renaissance. Motets by Palestrina and Tallis set the scene: Palestrina’s magnificent eight-part Laudate Pueri looks back to the celebratory mood of Palm Sunday, and two settings of O Sacrum Convivium reflect on Jesus’s last meal and its significance at the heart of the Mass.

Turning away from the music and language of Rome, Kenneth Leighton’s What love is this of thine sets a meditation by the 17th-century Puritan poet Edward Taylor considering our response to Jesus’s sacrifice, with both words and music matching that of the Catholics for spiritual intensity.

Tomás Luis de Victoria’s setting of the Responsories for Maundy Thursday takes us back into the dark heart of the Passiontide story. Victoria’s music depicts the tragedy of Judas’s betrayal and death and Jesus’s lonely vigil with a simple but overwhelming sorrow.

​The words of Psalm 51, Miserere Mei, traditionally ended Holy Week services. This beautiful prayer seeking God’s mercy and salvation could be the words of Jesus as he prays in the Garden, or our own. Allegri’s famous setting of the Miserere has taken on a life of its own since its beginnings in the Vatican, the prayer taking flight on a soaring soprano line out of the Garden, out of the Sistine Chapel and spreading across the world.