After the huge emotional high of Saturday night’s Motette, which was followed by plenty of delicious and much-needed local beer, it was back to work on Sunday. We began by singing the Sunday morning service at the Stiftskirche, which was a fascinating experience, and one which did a lot to put Bach’s music in context. We were up in the spacious organ loft (which meant that the congregation at least were spared the sight of us fumbling around with unfamiliar service books), and our duties were to sing an anthem at the beginning and end of the service, and join in with the hymns. The service is very simple, with congregational hymns playing a big part, each preceded by an elaborate organ improvisation by the Stiftskirche organist Ingo Bredenbach. We are so used to hearing Bach’s chorale preludes played as stand-alone pieces, often at the end of services that it’s easy to forget what they were actually for: hearing Prof. Bredebach’s imaginative improvisations (he worked Francesa’s pre-service Purcell into his first one) made a direct connection with what Bach and others were doing.

After the service, the church held a short piano recital by one of Prof. Bredenbach’s students of Beethoven bagatelles – serious business when it wasn’t even lunchtime yet! The church has acquired a magnificent Bösendorfer piano with an extended range the bass (the keys are coloured black, to alert the unwary player) – apparently this type of piano was originally developed for the pianist Ferruccio Busoni for his arrangements of Bach organ music. And outside, Tübingen city centre was livelier than ever, because not only was the Umbrian-Provençal market still in full swing, but there was also a 10k race snaking its way through the city centre. It was a perfect weekend for us to be there: the city was absolutely buzzing the whole time, and the market was handy for souvenir shopping and quick street-food lunches.

Our afternoon concert venue was a world away from the Lutheran austerity of the Stiftskirche. Schloss Solitude is a piece of rococo confectionary, built as a country retreat by one of the Dukes of Wüttemberg. It’s set on a hill just outside Stuttgart surrounded by lovely parkland and with great views over the countryside. The chapel where we sang was completely white – a wedding cake turned inside out, and a dramatic contrast with our black concert dress. As at the Stiftskirche, the audience made us feel very welcome, and were warmly appreciative of our performance: looking around and seeing Germans smiling happily at you whilst you’re singing Bach is most encouraging! We were also able to enjoy hearing Francesca playing the organ music based on Nun Lob mein Seel’ by Buxtehude and Praetorius, a tune that will now be forever associated with this tour. 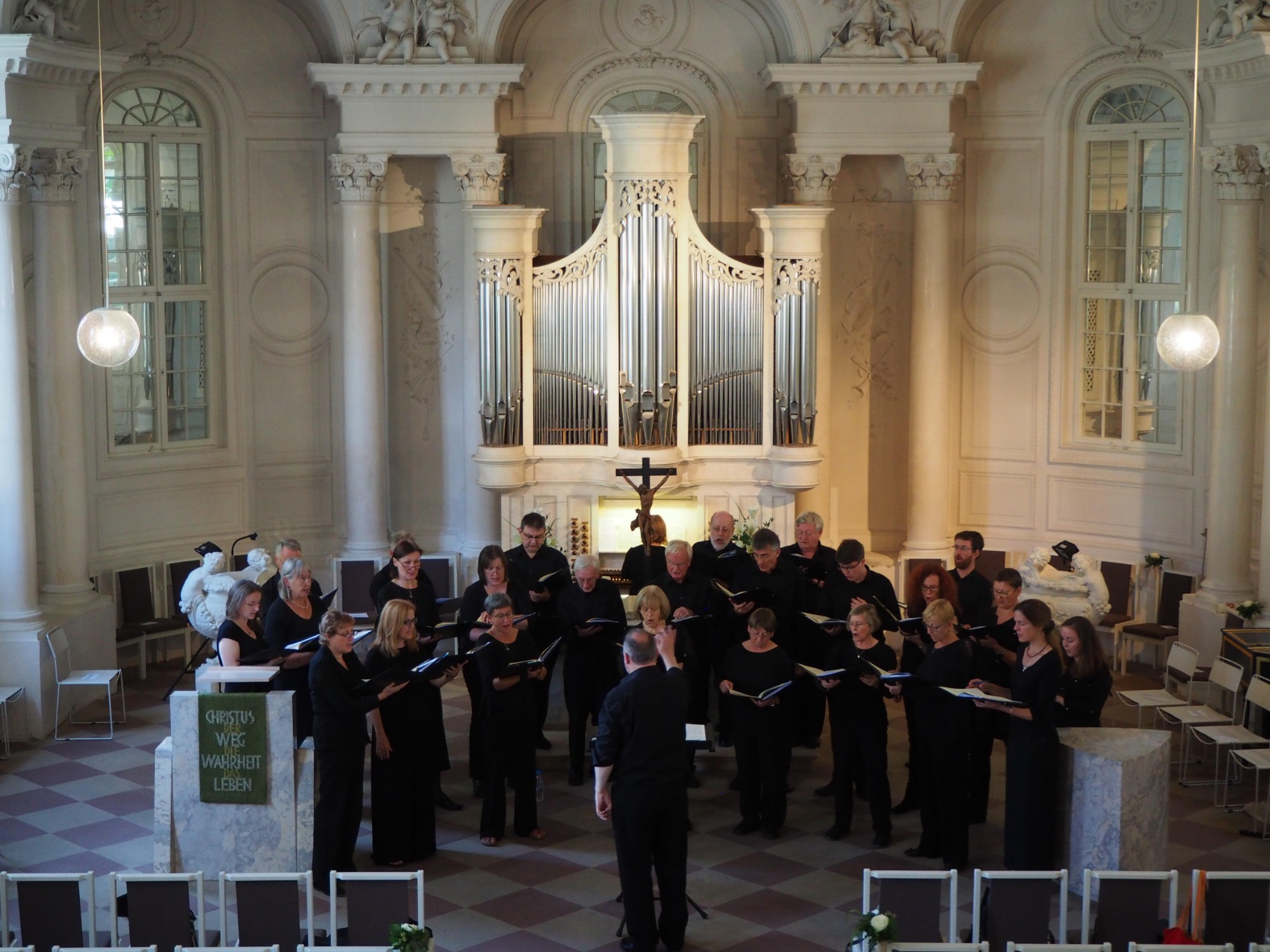 After all this, it’s possible that one or two beers may have been consumed. But what happens on tour, stays on tour.