Our first evening and day in Tübingen have been mostly about seeing friends and getting to know this lovely little city. After an easy day of travel, we checked into hotels and homestays, then invaded the rehearsal of Chor Semiseria, who we met last year when they came to Durham. Last year, we got their help and advice on singing Bach; this time, it turned out that they are preparing Rutter’s Magnificat and Britten’s St Nicolas so we happily sang along with them; then each choir sang to the other – Semiseria’s performance of Jake Runestad’s Nyom Nyom was infectiously joyful, and they also gave us a taste of North East England with an arrangement of Sting’s Fragile. Once the singing was done, Semiseria hosted us at a Greek restaurant where we were able to catch up with the friends we made last year.

Today was mostly spent exploring Tübingen in warm autumn sunshine, and enjoying the delights of their annual Umbrian-Provençal food market, which is clearly a major event, and also part of the city’s twinning links with Perugia and Aix-en-Provence. Sadly Durham doesn’t seem to be represented in this culinary festival (perhaps next year, Greggs could set up a stall), but at least we’ll be making our musical contribution – we could claim it’s the Great British Bach off? We’ve also enjoyed exploring the city, pottering through the little medieval streets lined with colourful buildings; strolling along the riverbanks; and enjoying a guided tour and a visit to the recently restored town hall. The energetic amongst us climbed the church tower for magnificent views over the city and the surrounding countryside. 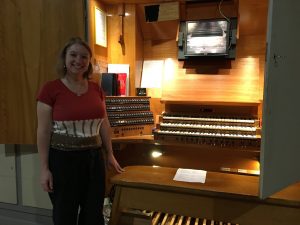 It was tempting to think that we were on holiday, but there was work to be done this afternoon when we met in the Stiftskirche for our first rehearsal. It’s a lovely space to sing in, with a generous acoustic that made everything feel easy. Francesca hasn’t yet let us hear the full force of the ending of MacMillan’s A New Song so that will be a treat for us in the concert, but from what we’ve heard so far, the organ has a lovely clean sound. It’s a relatively new instrument: built in 1965 and then renovated in 2001.

This evening we’ve been out and about in the town, sampling delicious local beer and relaxing with our German hosts before the big day tomorrow, when we sing in the Stiftskirche Mottete.