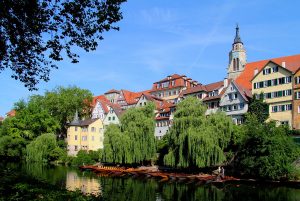 It’s a hilly medieval city, with cobbled streets, pretty old buildings, and there’s a picturesque river winding through the city centre and a large church dominating the skyline. Its university is one of the oldest in the country, and students dominate the life of the city. And it has a lot of choirs! This could be Durham, but it’s also Tübingen, our twin city, where we’re heading on our first ever overseas tour this weekend.

Thanks to connections through the city twinning partnership, we’ve been invited to give a concert in Tübingen’s Stiftkirche as part of their Tübingen Motette concert series. These free devotional concerts have been running continuously since 1945 and combine sacred music on a theme that reflects the Bible readings for the next day, with a small amount of congregational participation – a hymn and some prayers. This Autumn’s Motette concerts have an additional theme of “the road to Bach”, leading up to Tübingen’s Bach festival later in the year. These conditions proved no obstacle to Julian’s genius for concert programming: we build up to Bach’s magnificent double-choir motet Singet dem Herrn with a mixture of British and earlier German pieces that draw on the “Sing unto the Lord” psalm texts. Singing Bach to a knowledgeable German audience is, truth be told, a little daunting, but we’re looking forward to showcasing our own choral tradition with music by Byrd, Tomkins, Purcell and MacMillan.

Last year, a Tübingen choir, Semiseria, visited Durham and gave a performance of Mozart’s Requiem in the cathedral with Durham’s Cobweb orchestra. During their trip, they spent time with some of Durham’s choirs, including us, and we had a marvellous evening sharing music and beer with them. A return match has been arranged for the first night of our trip and we’re very much looking forward to seeing them again. Fortunately, our schedule allows us a morning off after these jollities.

As well as the Motette concert, the Stiftskirche have invited us to sing at their Sunday morning service – Lutheran liturgy will be a totally new experience for many of us, but perhaps our two Finnish altos will be able to help us out. We’re also singing a concert at the beautiful Schloss Solitude near Stuttgart.

For now, we’ve had the last rehearsals, where we’ve had to adjust to singing in a smaller group than we usually are; our amazing tour manager Ruth has all the complicated logistical arrangements under control; and our last task is to compress music, gifts and concert clothes into Ryanair’s luggage allowance and get ourselves up bright and early for a bus to Manchester airport tomorrow. There’ll be further posts here about the trip, and you’ll be able to follow what we’re up to on Twitter or Facebook.

For more details about the concerts, see our Tübingen-tour webpage